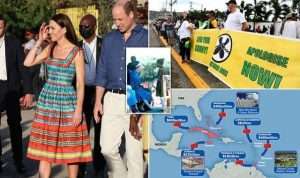 (DAILY MAIL) – The Duke and Duchess of Cambridge’s tour of the Caribbean has been overshadowed by protests focused on the legacy of the British Empire and slavery in the region.

In Jamaica – the second stop on the eight-day visit – demonstrators in the capital Kingston accused the couple of benefiting from the ‘blood, sweat and tears of slaves’ and called for reparations to be paid.

The couple were also forced to cancel a visit to a cacao farm shortly after arriving in Belize following residents’ anger that they weren’t consulted about the football pitch earmarked for the landing of their helicopter.

And in the Bahamas, which William and Kate arrive in tomorrow, the country’s national reparations committee has called on the royal couple to acknowledge that the British economy was ‘built on the backs’ of past Bahamians.

In each nation – all of which were once part of the British Empire and are now Commonwealth countries – there is a complicated history of slavery that has contributed to varying amounts of ill-feeling towards the Royal family and the UK.

In Jamaica alone, hundreds of thousands of African slaves were shipped by Britain from the 17th century onwards and forced to work in brutal conditions on sugar plantations.

That legacy has contributed towards a growing desire to remove the Queen as head of state in the country, which became independent from Britain in 1962.

The shift away from British influence has been hastened by the flooding in of Chinese investment into the region that amounts to at least $7billion since 2005.

At least $450million of Chinese money has been spent in the Bahamas, $490million in Barbados, $1.9billion in Trinidad and Tobago and $2.7billion in Jamaica.

The calls for change were made stronger by the global Black Lives Matter protests sparked by the murder of black man George Floyd at the hands of police in the U.S. in May 2020.

Anti-royal sentiment in the Caribbean was most recently demonstrated with the government of Barbados’s decision last November to become a republic by removing the Queen as head of state.

The history of the slave trade and Britain’s role in it in Barbados played a part in that decision.

Jamaica was initially a Spanish colony before it was captured by what was then the English navy in 1665.

After Spanish attempts to regain the island were finally stopped, African slaves began to be imported.

When the sugar trade blossomed in the mid-17th century the number of slaves arriving ballooned.

By 1831 – after Britain had become the first European nation to prohibit the slave trade within its Empire in 1807 – there were around 300,000 slaves in Jamaica.

Overall, the National Library of Jamaica estimates that 600,000 Africans were shipped to Jamaica as slaves.

The practice of slavery in the British Empire was formally abolished in 1834.

This also ended slavery in Belize and the Bahamas. In Belize, thousands of slaves were imported and put to work in timber production.

In the Bahamas, slaves worked in cotton production and also as field labourers, domestic servants and as salt collectors.

Slaves were also used in Britain’s other territories in the Caribbean, which included Bermuda, Barbados, Anguilla and Guyana.

To compensate slave owners in Jamaica, the British government took out a £20million loan – the equivalent of around £200billion now – and only finished paying off the ensuing interest payments in 2015.

This legacy prompted Jamaica’s government to announce last July that it was planning to ask for reparations from Britain.

Olivia Grange, Jamaica’s minister of sports, youth and culture, said the country hoped for ‘reparatory justice in all forms’ to ‘repair the damages that our ancestors experienced’.

Jamaica and Trinidad and Tobago were the first Caribbean nations to break free from British rule, with both countries declaring independence in 1962.

Between 1966 and 1983, a further eight nations – including Belize, The Bahamas and Barbados – in the Caribbean became independent, leaving only five as British Overseas Territories.

When they became independent nations, Dominica, Guyana and Trinidad and Tobago also opted to remove the Queen as their head of state.

Four of Britain’s former territories in the Caribbean – Dominica, Guyana, Trinidad and Tobago and most recently Barbados – have also become republics.

Whilst Dominica became a republic when it became independent in 1978, Guyana opted to remove symbolic royal rule in 1970, four years after its independence date.

Trinidad and Tobago became a republic in 1976, 14 years after independence.

Barbados’s transition last year followed those of Dominica, Guyana and Trinidad and Tobago.

The idea of removing the Queen as head of state was formally looked at in the 1970s but it was decided that there was still not enough public support.

The next milestone came in 1998, when a Barbados constitutional review commission recommended republican status.

Then, in 2003, the country opted to replace the London-based Judicial Committee of the Privy Council with the Caribbean Court of Justice, located in Trinidad and Tobago’s Port of Spain, as its final appeals court.

In 2005, legislation was passed to allow for a referendum on the shift to republicanism, but the actual vote never took place.

In 2015, Prime Minister Freundel Stuart said ‘we have to move from a monarchical system to a republican form of government in the very near future’.

In the last two years, republicanism gathered pace further amid the fallout from the Black Lives Matter movement, renewed focus on the horrendous history of the slave trade, and Britain’s catastrophic handling of the Windrush scandal.

This culminated in the move led by Barbados’s prime minister, Mia Amor Mottley to remove the Queen as head of state in November last year.

There were some critics of the move, with opposition politicians saying there was no proper consultation.

Academic Dr Ronnie Yearwood, a lecturer in law at the University of the West Indies, added at the time that there was ‘no clamour on the streets’ for Barbados to become a republic.

However, in Jamaica – which has retained the Queen as head of state – ill-feeling towards Britain and the Royal family is stronger.

Yesterday, protesters gathered outside the British High Commission in Kingston, with one placard held by a little girl reading: ‘Kings, Queens and Princesses and Princes belong in fairytales not in Jamaica!’

Jamaican human rights advocate Opal Adisa, who organised the protest, said: ‘Kate and William are beneficiaries, so they are, in fact, complicit because they are positioned to benefit specifically from our ancestors, and we’re not benefitting from our ancestors.

‘The luxury and the lifestyle that they have had and that they continue to have, traipsing all over the world for free with no expense, that is a result of my great, great grandmother and grandfather, their blood and tears and sweat.’

She joined calls for an apology, saying the monarchy should provide ‘economic social reparation’, such as ‘building us proper hospitals, providing and making sure that our children are educated through college level, and making sure land is equally distributed’.

Ms Adisa said an apology would be the ‘first step towards healing and reconciliation’.

The calls for the country to follow Barbados in becoming a republic have grown stronger in recent years.

Jamaica’s prime minister, Andrew Holness, has committed to making his country a republic and there is also cross-party support for the move.

Mr Holness said last year that there was ‘no question’ that Jamaica had to become a republic.

He added: ‘Who is arguing that point? We have put together a plan to move towards that in a way that is meaningful and substantial in function and form.

‘That is what we are going to do.’

In Belize, prime minister John Briceño hinted that his country might follow Barbados in becoming a republic.

The Belize Progressive Party (BPP) has also openly talked of a ‘Republic of Belize’.

In the Bahamas, the country’s former attorney general Sean McWeeney said a shift to a republic is ‘inevitable’.

After Barbados’s move, the Bahamas’s foreign affairs minister, Fred Mitchell, said he was ‘committed to a republic’.

This week, the Bahamas’s national reparations committee issued a strongly worded document ahead of William and Kate’s arrival there tomorrow.

It said the monarchy had ‘looted and pillaged our land and our people for centuries, leaving us struggling with under development, left to pick up the pieces.’

In 2013 the Bahamas committee was founded to establish the moral, ethical, and legal case for the payment of repatriations by European countries.

It said in the statement: ‘We, the members of the Bahamas National Reparations Committee (BNRC), recognise that the people of the Bahamas have been left holding the bag for much of the cost of this extravagant trip.

‘Why are we footing the bill for the benefit of a regime whose rise to ‘greatness’ was fuelled by the extinction, enslavement, colonisation, and degradation of the people of this land? Why are we being made to pay again?

‘The visit to commemorates 70 years since Queen Elizabeth’s accession to the throne of imperialism – more years than the Bahamas has been a sovereign nation.

‘The BNRC asserts that we as Bahamians must have a clear understanding of what this trip truly means. We are not beholden to the British monarchy in any way and we do not owe them a debt of gratitude for anything – not for our culture, religion, or system of governance.

‘Instead the monarchy has looted and pillaged our land and our people for centuries, leaving us struggling with under development, left to pick up the pieces.’

The Chinese government has used its investment in the Caribbean to build roads, ports and resorts, including the five-star Baha Mar casino and resort in the Bahamas.

Much of the money has been offered in ‘soft loans’ for infrastructure projects that typically come with requirements to use Chinese contractors for the work.

The loans also give Beijing long-term leverage over the cash-strapped Caribbean nations.

Eight countries in the Caribbean have also signed on to Beijing’s Belt and Road initiative, including Jamaica, Barbados and Trinidad and Tobago.

In 2005, China rewarded the island of Grenada, which has an annual turnover of just $1.8billion, with a brand new $55million cricket stadium after it cut relations with Taiwan.

Similarly, in 2018, the Dominican Republic received Chinese investments and loans thought to have topped $3billion after it also cut ties with Taipei.

More recently, a Chinese firm took full control of Jamaica Kingston Freeport in April 2020, the island’s largest container port and one of the largest in the Caribbean.

In Barbados, Chinese money has gone on projects that construction of a Confucius Institute at the University of the West Indies’s campus, the refurbishment of the national stadium in Bridgetown, the upgrade of the sewage system, the rebuilding of roads and the construction of a spa resort at the famous Sam Lord’s Castle.

China has also donated a coastal patrol vessel to Barbados’s navy, given 30,000 doses of its Sinovac vaccine to combat the Covid-19 pandemic and sold 30 electric buses to the country.

When Barbados made the shift to becoming a republic, Tom Tugendhat, chairman of the UK’s foreign affairs committee, accused Beijing of ‘playing a large role’ in the decision.