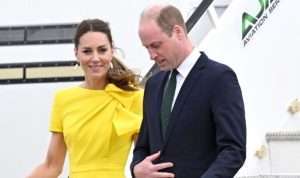 (TIME) – The British royal family is facing embarrassment on the international stage this week as protests disrupt Prince William and Kate Middleton’s tour of former British colonies in the Caribbean. The Duke and Duchess of Cambridge began their week-long visit to Belize, Jamaica and the Bahamas March 19.

Officially, the trip was meant to commemorate Queen Elizabeth II’s Platinum Jubilee, celebrating 70 years on the throne. Many observers say the trip was meant to persuade the three countries to keep the Queen as head of state, and not to follow Barbados, which transitioned to a republic last November. But growing calls to cut formal ties with the Queen and campaigns for slavery reparations have ignited a reckoning with the region’s colonial past.

How is Prince William and Kate’s visit sparking controversy?

Prince William and Kate arrived in Jamaica, the second stop of their trip, on March 22. Only a day later, The Independent reported that the Jamaican government had begun the process of transitioning the island nation—which is the largest English speaking country in the Caribbean—to a republic.

The news arrived at a difficult moment for the royals. The day before the couple’s arrival in the country, one hundred Jamaican academics, politicians, and cultural figures signed an open letter calling for the royal family and British government to apologize and pay reparations for subjecting the island to colonial rule and slavery.

“We are of the view an apology for British crimes against humanity, including but not limited to the exploitation of the indigenous people of Jamaica, the transatlantic trafficking of Africans, the enslavement of Africans, indentureship and colonialization is necessary to begin a process of healing, forgiveness, reconciliation and compensation,” the letter said.

The letter’s consignatories describe Prince William and Kate as “direct beneficiaries of the wealth accumulated by the royal family…from the trafficking and enslavement of Africans”. In reference to the Queen’s Jubilee, the letter reads: “We see no reason to celebrate 70 years of the ascension of your grandmother to the British throne because her leadership, and that of her predecessors, has perpetuated the greatest human rights tragedy in the history of humankind.”

The group, called the Advocates Network, staged a protest March 22 outside the British High Commission in Kingston to coincide with the couple’s arrival. Demonstrators held banners reading “#SehYuhSorry and make REPARATIONS.”

The following day, Prince William stopped short of an apology, instead expressing “profound sorrow” for the “appalling atrocity of slavery” during an address to Jamaica’s prime minister March 23.

“Slavery was abhorrent and it never should have happened,” he said. “I strongly agree with my father, the Prince of Wales, who said in Barbados last year that the appalling atrocity of slavery forever stains our history.”

The Advocates Network issued a statement in response, calling the Prince’s words “unacceptable,” adding: “There was no responsibility taken! No call out of centuries of British bloody conquest and plunder.”

Events in Jamaica weren’t the only controversy for the couple on their tour. They canceled their first major engagement the day before touching down in Belize, the first stop on the trip. William and Kate were due to visit a cocoa farm March 20 but locals staged a protest against the visit, objecting to the couple’s plans to land their helicopter on a nearby football pitch without consultation, the Daily Mail reported.

The protests were part of a wider land dispute between indigenous communities and Flora and Fauna International (FFI), the conservation charity that William supports as patron. Locals allege that the charity controls their communal ancestral lands, lost in the colonial era, as “private property,” according to the report. Demonstrators carried banners reading ‘Prince William leave our land’ and ‘Colonial legacy of theft continues with Prince and FFI’.

Why is the Queen still head of state in 14 independent countries?

Queen Elizabeth II is not only the monarch of the U.K., but also of 14 other countries, including Canada, Australia, and Papua New Guinea, known as the Commonwealth realms. They are distinct from the Commonwealth of Nations, a group of 54 countries that were once part of the British Empire—the majority of which no longer recognize the Queen as sovereign.

The nations of the Commonwealth realms are constitutional monarchies—the Queen is a symbolic head of state but the countries are ruled by elected governments. The Queen is not involved in governing but she does still have some constitutional duties, such as approving new governments and legislation, which are carried out by a royal representative.

Although the Queen’s position in these nations is mostly symbolic, the U.K. government noted that the monarchy forms part of Britain’s outsized influence on the world.

In November, Barbados became the first country to remove the Queen as head of state since Mauritius in 1992. Dame Sandra Mason, the island’s governor-general since 2018, was named as president-elect of the nation. “The time has come to fully leave our colonial past behind,” she said.

Debates about abolishing the monarchy have rumbled on for decades in other Commonwealth realms. Both Australia and the Caribbean nation St. Vincent and the Grenadines held failed referendums on becoming republics, in 1999 and 2009 respectively. The Prime Minister of New Zealand, Jacinda Arden, told the Guardian in 2018 that she expected the country to transition to a republic in her lifetime.

According to Barbadian political analyst and pollster Peter Wickham, certain Commonwealth realms may struggle to relinquish the monarchy even if the public and government want it. Barbados was able to become a republic because its constitution allowed the government to take the decision independently. In countries like Jamaica, it can only happen through a referendum with a two-thirds majority. “I don’t believe it will ever happen because the referendum will be manipulated by political parties,” Wickham says, drawing comparisons with the divisions caused by the U.K.’s Brexit referendum.

Why do campaigners no longer want the Queen as head of state?

Although the Queen’s role in Commonwealth realms is largely symbolic, attitudes towards the royal family are varied and complex. Wickham says that although Elizabeth herself is quite popular in many Caribbean countries, she is perceived as “not really relevant.”

“We don’t have a problem with her or even monarchy as such,” he says. “Most of us think she’s all the way in England and there’s no reason why we should maintain her as head of state.”

Some believe that keeping the Queen as head of state undermines independence, and only serves to perpetuate colonial subservience. “Imagine being given independence, and then to be told as an adult nation, that the Queen still had a stake in Jamaica and that the island is not really free. It is still an infant colony,” Jamaican-born British writer and academic Dr. Velma McCarthy told TIME.

Calls for republicanism have been growing in Jamaica, which celebrates its 60-year anniversary of independence from Britain this year. According to leader of the Jamaican opposition, Mark Golding, the killing of George Floyd in 2020 and the subsequent Black Lives Matter protests reignited conversations around national identity in Jamaica, whose population is over 90% Black.

“There are strong feelings that the royal family should apologize for their involvement with the slave trade and the plantation system which our people went through for a few hundred years,” Golding tells TIME. “I think it would enhance the cohesiveness of the relationship going forward.”

Golding says that although William and Kate’s trip to Jamaica may have been more “fraught” than they expected, he hopes it was a revelatory experience for the couples at the center of the royal family’s future. “I hope that they will realize that a better future can be assured by some introspection and reflection on the past, and the role of the institution of which they are now key members.”

Further to an apology, many campaigners demand compensation for the centuries of human rights violations that still impact former colonies today. CARICOM, an intergovernmental organization of 15 Caribbean countries, unanimously passed a 10-point plan in 2014 calling on European countries to compensate former colonies for centuries of exploitation and slavery. The demands include a repatriation of the descendants of slaves and debt cancellation. The body, which includes Jamaica and Barbados, says that the subjugation of former colonies by European governments is “the primary cause of development failure in the Caribbean.” Golding agrees, attributing issues of economic and healthcare inequality in Jamaica to the legacy of colonialism.

“Today, Jamaicans are still struggling and relying on remittances from relatives abroad, McCarthy says. “I’m 65 years old this year, and I’ve been sending remittances [from the U.K.] to rural Jamaicas since I was 17 years old.”

Another issue influencing public opinion in former British colonies is allegations of racism made by Meghan Markle, the first biracial woman to marry into the royal family.

“Suddenly, all of us who before didn’t really take much notice of the royal family began to see what was happening to Markle,” McCarthy says. “She was vilified as a Black woman and no statement of support was made by the [royal] family.”

Markle’s allegations were so damaging the royal family was forced to respond. The Queen issued a statement calling them “concerning,” while Prince William defended the monarchy, saying, “We’re very much not a racist family.”

What does the future hold for the British monarchy around the world?

Despite a string of royal controversies in recent months—from Prince Andrew’s settlement in a sexual assault lawsuit to allegations of a cash-for-honors scandal at Prince Charles’ charity—public opinion of the Queen herself remains high. But the same may not be true of her heir. A poll conducted by Ipsos Mori of over 2,000 British adults found that the Queen, who in February tested positive for COVID-19, is more than three times more popular than her immediate heir, Prince Charles.

Some royal observers have suggested that the Queen is investing in Prince William and Kate, aged 39 and 40 respectively, as future leaders of the royal family. The couple are twice as popular as Charles who, at 73, may not be on the throne as long as his mother. The Caribbean tour was a crucial test of the monarchy’s relevance in the modern era—the scale of the opposition William and Kate faced may well trouble the Queen.

Ultimately, however, Barbadian political analyst Wickham believes the future of the British monarchy outside the U.K. is less an issue of royal popularity than it is about countries’ national identity. “This is not about Queen Elizabeth herself. It’s not about an individual,” he says. “It’s really about us moving in a different direction.”