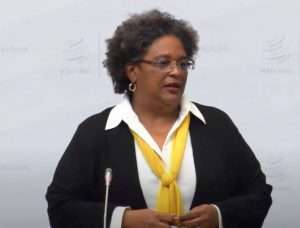 (CMC) — Barbadian Prime Minister Mia Amor Mottley wants to see the dismantling of the old global order and it being replaced with a new order that promotes world peace.

She issued the charge on Wednesday as she delivered the inaugural World Trade Organization (WTO) Presidential lecture, under the theme ‘Reinventing the Global Order’, from the WTO Headquarters.

Mottley told the gathering that the global order was “simply the embalming of the old colonial order that existed at the time of the establishment of these institutions”.

“And we have, therefore, to ask ourselves whether we are in a position to deliver on the peace that would permit us all to live in a just and inclusive society in each of our countries, or whether we are, in fact, creating a world where peace is elusive…Peace both in terms of security, but also peace that comes from economic justice. Therefore, we have to ask ourselves if we can live in this global order,” the Barbadian leader stated.

The prime minister articulated the view that achieving a new global order required a transformative agenda that was dependent on the will of all citizens, and queried whether the world was ready to exercise the global moral leadership and exercise the commitment and the political will necessary, strategically, “that will allow us to pursue the transformative agenda in order for us to be able to reinvent the new global order”.

Mottley contended that the existing global order perpetuated a situation of first and second-class countries and those countries, by their actions, had determined the rights of a few and had exercised their powers to veto decisions at the roundtable on critical matters.

“This is a global order that is compromising, equally, our right to development, our right and capacity to attain the sustainable development goals that each and every one of our countries has submitted is critical for our populations in order for them to prosper,” the prime minister stated.

She said the ongoing invasion of Ukraine by Russia had reset the global order, adding that the old order had not delivered on peace, prosperity, and stability in the world.

Mottley contended that open and equitable trade must be at the centre of the new world order, as she challenged the WTO to be in the vanguard to bring about the necessary change.

She pointed out that the organisation was “born into a world of trade in manufacture and tariffs and it has an inheritance from the General Agreement on Tariffs and Trade that has to be confronted if we are to move away from the old colonial order and create opportunities for fairness among those countries and people of the world who need our protection the most”.

To reflect the next generation WTO, Mottley challenged the organisation to show a reinvigorated defence of the inequitable trading system by establishing a high-level committee to ask “whether the war on money laundering, the war on tax evasion, the war on the climate crisis or any of these well-intentioned campaigns have not inadvertently become a war on developing country exporters, or a war on small island states exporters”.