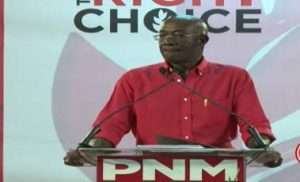 (CMC) – Prime Minister Dr Keith Rowley says he sees no reason why Trinidad and Tobago cannot be fully re-opened as the country has been recording low numbers of cases linked to the coronavirus (COVID-19) pandemic that killed 3,719 people and infected 136,000 others over the past two years.

Trinidad and Tobago, like several other Caribbean countries, closed its borders as part of the efforts to stem the spread of the virus and in recent weeks, several regional countries have been slowly reducing their various measures and allowing for a certain level of normalcy.

Rowley, addressing a public meeting of his ruling People’s National Movement (PNM) on Tuesday night, said that several days after the island staged low-level Carnival activities, there has not been any significant increase in new cases of the virus on the island.

“Tonight we continue to be mindful of the fact that there is a pandemic and that there are viruses out there that we should avoid, but we appear as though we are in a place where we are coping with the virus and our economy is doing well,” said Rowley.

“I waited to see what was happening with Carnival. The 14 days after Carnival would have come and gone, that additional mixing that we did has not changed our circumstance for the worse, so I am not being minded to tell the country, I see no reason now not to open up the country completely,” he added.

Rowley said that a meeting would be held “within the next few days” with the health team “and we will take decisions commensurate with the circumstances in Trinidad and Tobago and compare it with what’s happening elsewhere.

“Remember there are one or two countries right now facing major outbreaks so we have to be careful, mindful, but we can be a whole lot more operational,” Rowley said, adding that “our economy has come through a very difficult period but we expect that there will be some growth in our economy”.

He said those requiring government’s assistance will get that and that “those who can help themselves will be encouraged to do so and we will strengthen our position going forward.”

“All I ask of you is to think wisely, behave sensibly, ignore foolishness, and ignore those with cocoa in the sun, trying to give you the impression that there would be no rain,” he said.