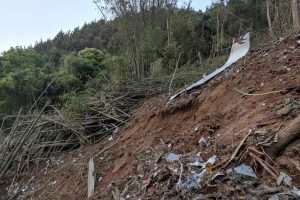 (AP) — Mud-stained wallets. Bank cards. Official identity cards. Poignant reminders of 132 lives presumed lost were lined up by rescue workers scouring a remote Chinese mountainside Tuesday for the wreckage of a China Eastern flight that one day earlier inexplicably fell from the sky and burst into a huge fireball.

No survivors have been found among the 123 passengers and nine crew members. Video clips posted by China’s state media show small pieces of the Boeing 737-800 plane scattered over a wide forested area, some in green fields, others in burnt-out patches with raw earth exposed after fires burned in the trees. Each piece of debris has a number next to it, the larger ones marked off by police tape.

Search teams planned to work through the night using their hands, picks, sniffer dogs and other equipment to look for survivors, state broadcaster CCTV reported.

The steep, rough terrain and the huge size of the debris field were complicating the search for the black boxes, which hold the flight data and cockpit voice recorders, CCTV and the official Xinhua News Agency said.

Drones were being used to search the fragments of wreckage that were scattered across both sides of the mountain into which the plane crashed, state media reported.

As family members gathered at the destination and departure airports, what caused the plane to drop out of the sky shortly before it would have begun its descent to the southern China metropolis of Guangzhou remained a mystery.

The crash left a deep pit in the mountainside about the size of a football field, Xinhua said, citing rescuers. Chen Weihao, who saw the falling plane while working on a farm, told the news agency it hit a gap in the mountain where nobody lived.

“The plane looked to be in one piece when it nosedived. Within seconds, it crashed,” Chen said.

China Eastern flight 5735 crashed outside the city of Wuzhou in the Guangxi region while flying from Kunming, the capital of the southwestern province of Yunnan, to Guangzhou, an industrial center not far from Hong Kong on China’s southeastern coast. It ignited a fire big enough to be seen on NASA satellite images before firefighters could extinguished it.

No foreigners were on board the lost flight, the Foreign Ministry said, citing a preliminary review.

Dinglong Culture, a Guangzhou company in both mining and TV and movie production, said in a statement to the Shenzhen stock exchange that its CFO, Fang Fang, was a passenger. Zhongxinghua, an accounting firm used by Dinglong, said that two of its employees were also on the flight.