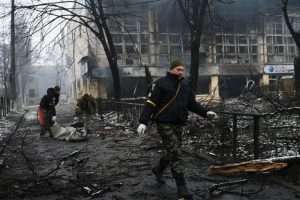 (AFP) — Ukraine’s strategic city of Mykolaiv is holding out against the Russian invasion, in part due to the tenacity of its residents.

They are determined to stay and defend it despite incessant bombardment.

The southern city is a key obstacle for Russian forces trying to move west from Crimea to take Odessa, Ukraine’s major port on the Black Sea, and it has taken a battering in the more than three weeks since Russian troops invaded.

In the eastern Inhulskyi district of the city, an unexploded artillery rocket can be seen sticking up from the pavement, a traffic cone planted alongside it to warn motorists.

A bit further, in the city’s vast cemetery, another unexploded rocket has burrowed into the ground nearly up to its fins.

Smoke from burning garbage hangs in the air.

It’s there that a dozen family and friends have gathered to bury Igor Dundukov, 46. He was killed along with dozens of other soldiers last Friday, when the military barracks came under fire.

Sergei’s wife, Galina, slips a crucifix into a pocket of Dundukov’s fatigues before the coffin is sealed and lowered into the ground.

Igor enlisted at the start of the invasion, Sergei says.

“We supported his commitment to defending our homeland,” he adds, dismissing any idea of leaving the city despite the boom of artillery fire in the distance.

“We were born here and grew up here. And we don’t have anywhere else to go. No relatives abroad. No-one.”

If a good part of the city’s 500,000 pre-war residents have fled — mostly towards Odessa, some 130 kilometres (80 miles) to the southwest — those that remain are determined to hold out.

In the afternoon, an air strike guts a building. Witnesses say it was a hotel with a bank branch on the ground floor.

“I have four grandchildren here, one who is fighting. How could I leave them?”

In the Kulbakino district, which includes several blocks of residential buildings, the population has fallen from 12,000 to fewer than 1,000, according to Alexander Zadera.

The 56-year-old had to pull his octogenarian mother from her apartment after the building was struck on March 7.

“We’ve got used to eating with that sort of background noise,” he says of the fighting at the nearby front.

“Now even my mother recognises the sounds of different types of artillery and missile fire,” the former air force colonel adds wryly.

The building’s residents have set themselves up in the basement for the duration.

At the back, between two matresses, a game of backgammon has been left waiting while the residents share tea in the candle-lit main room.

“We pass our evenings here praying for our soldiers, our homeland,” says schoolteacher Inna Kouriy.

“Every time there is a raid or a strike, we come down here. And when things calm down we go back up, and so on,” she adds.

Kouriy tries to organise remote classes for her students who have left the city or the country.

“There were quite a few of us here at the beginning but many left the city because they had children or family. But we’re staying until the end,” she says.

“We Ukrainians are patient people but we won’t give our country up to anyone.”