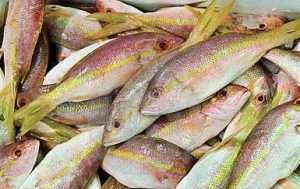 (CMC) — St Vincent and the Grenadines Fisheries Minister, Saboto Caesar, says the Caribbean will need to collaborate with international stakeholders in the global fight against Illegal, Unreported and Unregulated (IUU) fishing and organised crime in the fishing industry.

Caesar, who is chair of the Ministerial Council of the Caribbean Regional Fisheries Mechanism (CRFM) told a technical meeting on the issue that the fight globally has increased against IUU fishing and organised crime, and CRFM member states continue to honour their duty in that regard.

“It is our quest in the Caribbean to partner with all international agencies to ensure that we reduce criminal activities when it comes to the Blue Economy. We intend to work with regional and international partners and other friendly governments such as Norway… because every member state in the global community must play an important role,” he told the meeting that was organised by the CRFM in collaboration with the Caribbean Community Implementation Agency for Crime and Security (Caricom IMPACS).

CRFM executive director, Milton Haughton, noted the seriousness and impacts of illegal and criminal activities in the fisheries sector and expressed the CRFM’s appreciation for Norway’s commitment to the sustainable use of ocean resources, through the Blue Justice Initiative and the Copenhagen Declaration.

He thanked Norway and the United Nations Development Programme (UNDP) for supporting the region in its efforts to help address “this intractable problem”.

The organisers said that the meeting marked an important milestone in the region’s efforts to fortify its response “to this very challenging and costly problem”, through coordinated action at both the national and regional levels, with the support of Norway and the UNDP under the Blue Justice Initiative.

The CRFM and partner agencies both at the Caricom and international levels have committed to advancing their collaboration using modern digital technology, to strengthen the region’s response to illegal fishing and transnational organised criminal activities, such as drugs, human and small arms trafficking, trade in contraband goods, document fraud and forgery, tax crimes, and money laundering, which use commercial and recreational fishing as a cover for their activities.

Last October, during a high-level meeting of CRFM ministers, 12 member states signed the International Declaration on Transnational Organised Crime in the Global Fishing Industry, also known as the ‘Copenhagen Declaration’.

They have since endorsed the Blue Justice Initiative, which supports developing countries in operationalising the Copenhagen Declaration, aimed at “promoting a sustainable and fair Blue Economy for all that is free from fisheries crime”.

The technical meeting of senior fisheries and maritime law enforcement officers is intended to identify priority actions to strengthen regional and international cooperation to combat and eradicate IUU fishing and transnational organised crime in the fisheries sector.

“The event marked an important milestone for the Caribbean region in collectively combating the scourge of crime connected with the fishing sector,” according to a statement issued following the deliberations.

It said that more than 90 participants participated in the virtual session that featured a diverse array of speakers who provided participants with insights on the Blue Justice Initiative and Copenhagen Declaration, the UNDP Blue Resilience Project and its use of digital technology and institutional cooperation, tools and techniques to detect and analyse fisheries crime.