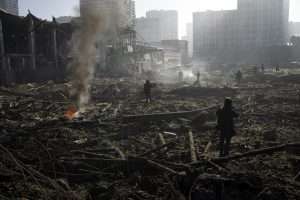 (AP) — Ukrainian officials defiantly rejected a Russian demand that their forces in Mariupol lay down arms and raise white flags Monday in exchange for safe passage out of the besieged strategic port city.

Even as Russia intensified its attempt to pummel Mariupol into surrender, its offensive in other parts of Ukraine has floundered. Western governments and analysts say the broader conflict is grinding into a war of attrition, with Russia continuing to bombard cities.

In the capital, Kyiv, a shopping centre in the densely populated Podil district near the city centre was a smoldering, flattened ruin Monday after being hit the day before by shelling that killed eight people, according to emergency officials. The force of the explosion shattered every window in a neighbouring high-rise. Artillery boomed in the distance as firefighters picked their way through the destruction.

Ukrainian authorities also said Russia shelled a chemical plant in northeastern Ukraine, sending toxic ammonia leaking into the air, and hit a military training base in the west with cruise missiles.

The encircled southern city of Mariupol on the Sea of Azov has seen some of the worst horrors of the war, under Russian pounding for more than three weeks, in a brutal assault that Ukrainian and Western officials have called a war crime.

Strikes hit an art school sheltering some 400 people only hours before Russia’s offer to open corridors out of the city in return for the capitulation of its defenders, according to Ukrainian officials.

Ukraine’s President Volodymyr Zelenskyy said it was not clear how many casualties there were.

“They are under the rubble, and we don’t know how many of them have survived,” he said in a video address, vowing that Ukraine would “shoot down the pilot who dropped that bomb.”

Russian Colonel General Mikhail Mizintsev had offered two corridors — one heading east toward Russia and the other west to other parts of Ukraine — in return for Mariupol’s surrender. He did not say what Russia planned if the offer was rejected.