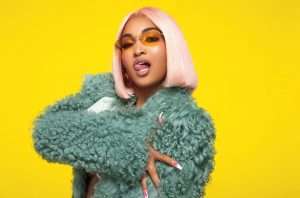 (URBAN ISLANDZ) – Shenseea and her record label, Interscope Records, are being sued for $10 million for alleged copyright infringement over “Lick”.

The sexual content of “Lick” is not the only thing causing controversy for Shenseea as the singer in the height of enjoying her debut album ‘ALPHA’ being released, has been hit with a multimillion-dollar lawsuit by an artist claiming to be the copyright owner of the song which “Lick” samples.

Shenseea’s song “Lick” featured Megan Thee Stallion and was reportedly a sample of a song called “Work” by Denise Belfon. Shenseea’s team had said the paperwork had been completed, and the label had the go-ahead from Belfon to sample the song after fans called out Shenseea for sounding similar to Belfon’s song.

According to the new lawsuit, “Work,” is a song “written, produced, and performed by the plaintiff, Anastas Hackett, and registered with the United States Copyright Office. Defendants Chinseea Linda Lee, Interscope Records, Atal Music, and Alexandre Escolier, the credited purported writers of the song “Lick,” and other defendants, copied and exploited, without authorization or credit, the “Work” composition.”

The filing explains that Nas-T wrote, produced, and recorded the song “Work” in 1999 with Denise Belfon, which enjoyed wide commercial success in the United States and Trinidad.

He goes on to say that in September of 2021, Atal Music and Alexander wrote to him regarding the clearing of samples for Shenseea to use on her new hit single “Lick”. Shenseea wanted to use “Work” (Hackett/Taitt) in a new copyright work entitled “Lick” by using the 8-second vocal sample of the phrase “put your back in it”, which is found in the intro @ 0:00-0:08 and in the outro @ 2:23-2:31 of the new work; and a 14-second re-sing of the same phrase (“put your back in it”), which is heard 6x in each chorus in the song.

The lawsuit says that Hackett withheld his consent for the use of the song “because of the inadequate terms offered by the defendant(s)”, and they nevertheless persisted and sampled the song.

“Defendants without authority or consent used significant parts of plaintiffs’ music “work” without providing proper credit to the plaintiffs, released the song “Lick” on or about January 21, 2022, in violation of the United States Copyright Act… The defendants were placed on notice that they were using Plaintiffs’ work without authorization and that they are infringing Plaintiffs’ copyright, however, defendants have failed to correct their actions,” the lawsuit read.

Hackett has asked the court for injunctive relief against Shenseea and the other defendants and their agents, an account of profits from digital sales, merchandising, and other revenue streams and damages in excess of one hundred million dollars ($100M) and his attorney’s fees.

Meanwhile, Shenseea’s co-manager Romeich Major responded to reporters about the lawsuit, saying he did not know of any legal challenges and expressed that the label had crossed its t’s and dotted its I’s.

“Dat coulda neva happen cause a big label like dat woulda clear everything.”

Meanwhile, “Lick” was produced by hitmaker Murda Beatz. The song has caused quite a stir, and Denise Belfon had previously acknowledged that she had permitted the song to be sampled.

It’s unclear if there are issues between Belfon and Hackett as to ownership of the song, which she has voiced. The lawsuit has also not acknowledged whether Belfon is a defendant, and she has not been named at all.

The song recently resurged with popularity following a Tik Tok challenge called “Put Your Back In It”.

The famous parts of the song “If A Man Want Fi Test You” has been featured in Shenseea’s version, as well as the chorus “Put Your Back In It”.

Denise Belfon has not commented on the lawsuit, but back in January she released a statement congratulating Shenseea and Megan Thee Stallion while thanking them for using her song.

Shenseea addressed the allegations in January during an Instagram Live session when some fans accused her of jacking Denise Belfon song. At the time, she made it clear that she cleared the sample by the relevant party.

“Why would we risk being sued?” she said. “And it’s not something that is bothering me; it’s because I know that people will run with this narrative… It’s really just ignorance for real. Really just ignorance. An guess wha? Mi nuh care who waan try come afta mi caw guess wha: five year now mi inna di industry. Mi back broad, as you can see, I have a very broad back. Mi nuh give a sh*t!”

In the meantime, Shenseea is currently enjoying some success with her debut album, Alpha.