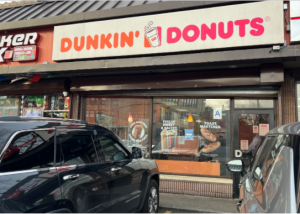 (CMC) – Police in New York are still looking for a man who fatally shot a young Jamaican national at a Dunkin Donuts restaurant in the Bronx last Friday allegedly over an argument he had with the assailant’s girlfriend about social distancing.

Police said that Stephen Stuart, 26, who migrated from Jamaica only three months ago, was in the restaurant with a friend when the victim reportedly got into a minor dispute with the unidentified woman over social distancing.

According to Stuart’s aunt, who also preferred to be anonymous, the assailant’s girlfriend told Stuart to “back up because he wasn’t wearing a mask.”

Stuart’s friend told reporters that the woman followed him and Stuart around the corner until her boyfriend arrived and shot Stuart on Holland Avenue.

“I don’t know what he said to her word for word, but it don’t call for somebody to lose their life,” Stuart’s aunt said.

“It’s just sad This could be any random person at any store or anywhere you go. This is crazy. People are just going crazy,” she added.

Police said that the restaurant’s video shows that the woman and Stuart had no physical contact.

Stuart is survived by a mother and two sisters, among other relatives, in Jamaica.