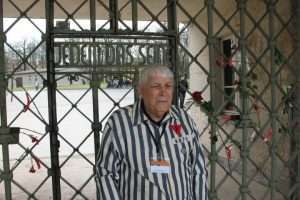 (AFP)— Boris Romantschenko, who survived four Nazi concentration camps during World War II, has been killed by Russian shelling that struck his flat in the Ukrainian city of Kharkiv, the Buchenwald Memorial foundation said Monday. He was 96 years old.

“It is with dismay that we have to report the violent death of Boris Romantschenko in the war in Ukraine,” the Buchenwald and Mittelbau-Dora Memorials foundation said in a statement.

Romantschenko died at home on March 18 after his building was bombed in the heavily shelled eastern city, the statement said, citing information from his son and granddaughter.

Describing him as “a close friend”, the foundation said Romantschenko was committed to educating others about the horrors of the Nazi era and had been vice president of the Buchenwald-Dora International Committee.

Romantschenko was born into a family of farmers in Bondari, near the Ukrainian city of Sumy, on January 20, 1926.

Although he was not Jewish, he was taken by German soldiers when he was 16 years old and deported to the German city of Dortmund in 1942 to work as a forced labourer, as part of Nazi intimidation tactics against the Ukrainian population at the time.

A failed escape attempt landed him in the notorious Buchenwald concentration camp in 1943. He also spent time in the camps of Peenemuende, where he was forced to help build V2 rockets, and in Mittelbau-Dora and Bergen-Belsen.

“This is what they call the ‘operation of denazification’,” said the head of Ukraine’s presidential office, Andriy Yermak, referring to Russian President Vladimir Putin’s widely disbelieved claim that ridding Ukraine of Nazis was one reason for Moscow’s invasion.

The Buchenwald Memorial said Romantschenko’s death “shows how dangerous the war in Ukraine is, also for concentration camp survivors”.

The foundation said it had partnered with 30 other remembrance groups and associations to set up an “aid network” to support former Nazi persecutees in Ukraine, including through donations of food and medicine.

It also plans to offer practical help to survivors fleeing Ukraine by picking them up from the Ukrainian border or finding them accommodation in Germany.

There are still some 42,000 survivors of Nazi crimes living in Ukraine, according to the aid network.