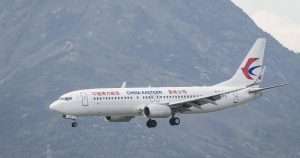 (BBC) – A Chinese passenger plane with 132 people on board has crashed in a mountainous area of southern China.

The China Eastern Airlines Boeing 737 was flying from Kunming to Guangzhou when it came down in hills in Guangxi province and caught fire.

It is feared there are no survivors, but the number of casualties and reason for the crash are not yet known.

More than 600 emergency responders have arrived at the crash site, state media reported.

Firefighters, who reached the scene first, had already extinguished the blaze in the hills caused by the plane crash, CCTV reported.

On Chinese social media footage taken by local villagers has gone viral, showing fire and smoke from the crash, and plane debris on the ground.

Air safety and aviation standards in China have improved vastly in recent decades following a series of accidents in the 1990s. Accidents such as this one are very rare, reports the BBC’s Robin Brant in Shanghai.

The country’s last major plane accident was in August 2010, when a flight from Harbin crashed in north-east Yichun during foggy weather, killing 42 people.

China Eastern is yet to comment on the crash, or respond to queries, but it has greyed out its logo on its Weibo account and also changed its website to black and white in an apparent sign of mourning.

The state-owned carrier is one of China’s big three airlines, along with China Southern and Air China.

China’s Civil Aviation Administration said it had also dispatched its investigators to the scene.

Flight tracking sites report the plane was in the air for just over an hour, and was nearing its destination when it went down in Wuzhou, a verdant, mountainous area prone to mixed weather at this time of year as China enters its annual flood season.

According to FlightRadar24 data, the last sourced information on the flight showed it ended at 14:22 local time, at an altitude of 3,225 ft.

The Boeing 737-800 plane was seven years old, according to tracker websites. It’s the predecessor model to the Boeing 737 Max line, which were the planes involved in deadly crashes in Indonesia in 2018 and Ethiopia in 2019.

China banned that model after those crashes.