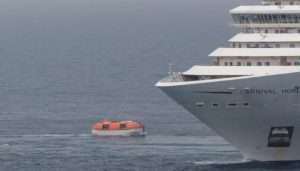 (USA TODAY) – A body has been recovered late Wednesday after a man jumped overboard from the Carnival Horizon cruise ship, the company told USA TODAY.

“Together with the US Coast Guard, the ship’s crew located and recovered the body of the guest. Carnival’s Care team is providing assistance to his family,” Carnival said in a statement provided by spokesperson Matt Lupoli.

Earlier Wednesday, the cruise line told USA TODAY that the Carnival Horizon was “conducting a search for a guest who jumped overboard” from Deck 11 around 7 p.m. ET. The incident occurred after the ship departed from Grand Turk in the Turks and Caicos at 5 p.m., according to Carnival.

David Custer, a passenger and a WNEM TV5 News anchor who was onboard the ship that departed on a 6-day cruise from Miami Sunday, told USA TODAY that passengers were informed that camera footage confirmed a person went overboard

“Our hearts sank when we heard the initial announcement,” Custer said. “We were at dinner and everyone ran to the closest windows. The cruise director made an announcement to confirm a man went overboard and asked anyone who may see someone in the water to immediately report it.”

James Presley, another passenger on the ship, told USA TODAY that immediately after the announcement was made, crew members threw life preservers with attached lights off the stern and port side of the ship. He posted a photo of one of the life preservers on Twitter.

After the announcement was made that the passenger was found, Custer said that “overwhelming sadness” was palpable onboard.

“Most of the entertainment has been canceled including the main show in the theatre,” Custer said. “It’s hard to kick back and have a good time knowing a family on board is dealing with such a tragic loss.”

According to CruiseMapper, the ship was sailing near the Turks and Caicos Islands just before 9:00 p.m. and is scheduled to be in the Mexican resort of Cozumel on Thursday.

The ship has been cleared by the Coast Guard to resume its intended course, according to Carnival.