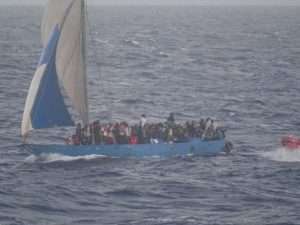 (CMC) – The United States Coast Guard said it has repatriated 84 Haitians to their homeland following two interdictions of undocumented migrants.

It said also that the Coast Guard had intercepted “an overloaded sail freighter about 60 miles east of Punta De Maisi, Cuba,” last week and that in both interdictions, the migrants were removed from their vessels due to safety of life at sea concerns.

“The Coast Guard is significantly increasing its patrols of the Windward Pass and the approaches to the southeastern United States to interdict and rescue migrants found aboard grossly overloaded, unseaworthy vessels,” said Rear Admiral Brendan McPherson, US Coast Guard District Seven Commander.

“These illegal voyages are always dangerous and often deadly. We are working closely with our DHS (US Department of Homeland Security) and DOD (US Department of Defense) partners to prevent these illegal migrant ventures and protect migrants from unscrupulous smugglers. Anyone attempting to enter the US illegally by sea should expect to be repatriated once interdicted,” McPherson said.

Since October 1, 2020, the US Coast Guard said its crews have interdicted 1577 Haitian migrants.