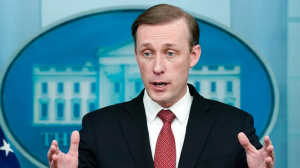 (REUTERS) – U. S. national security adviser Jake Sullivan spoke on Wednesday with Nikolay Patrushev, secretary of Russia’s Security Council, warning him of the consequences “of any possible Russian decision to use chemical or biological weapons in Ukraine”.

A White House statement after the call, the first high-level contact publicly disclosed between the two countries since Russia’s invasion of Ukraine, did not specify what those consequences would be.

Washington and its allies have accused Russia of spreading an unproven claim that Ukraine had a biological weapons program as a possible prelude to potentially launching its own biological or chemical attacks.

Russia’s defence ministry Tuesday accused Kyiv, without providing evidence, of planning a chemical attack against its own people in order to accuse Moscow of using chemical weapons in its three-week-old conflict with Ukraine.

“We know for certain that, with the support of Western countries, the SBU (Ukrainian Security Service) is preparing a provocation using poisonous substances against civilians in order to accuse Russia of using chemical weapons against the Ukrainian population,” the ministry said in a statement carried by the RIA news agency.

Sullivan told Patrushev that if Russia was serious about diplomacy, it should stop attacking Ukrainian cities and towns, the White House said in the statement.

Sullivan reiterated U. S. opposition to Russia’s invasion of Ukraine and told Patrushev that the U. S. would impose costs on Russia for it, the White House said.

Western countries have been swiftly moving to isolate Russia from world trade and the global financial system after its invasion of Ukraine that began in late February. It is Europe’s biggest invasion since World War Two and has destroyed some Ukrainian cities and sent more than 3 million refugees fleeing abroad. Moscow has characterized its actions as a “special military operation.”

The U. S. national security adviser, who was among American officials put on a “stop list” on Tuesday that bars them from entering Russia, also mentioned U. S. commitment to reinforce NATO’s eastern flank, the White House added.

Earlier in the day, Ukrainian President Volodymyr Zelenskiy urged American lawmakers to do more to protect his country from Russia’s invasion in an address before the U. S. Congress.