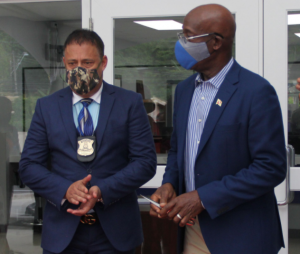 (GUARDIAN TT) – Former commissioner of police (CoP) Gary Griffith says he believes the reason Prime Minister Dr Keith Rowley sought to present information to the Police Service Commission (PolSC) about him was because the Prime Minister was jealous of his popularity.

Rowley has admitted he was the “high-ranking official” who gave former PolSC chairman Bliss Seepersad information concerning Griffith when he met with her at President’s House.

Griffith yesterday cited a poll where his popularity ranked at 89 per cent among those who wanted him to return as commissioner and those who had no issue with him. Other polls ranked him at 70 per cent.

“But the Prime Minister usually gets half of that, so obviously if you have someone twice more popular in the public eye than the PM and so successful, Gary Griffith could be a major hit to them politically,” Griffith said.

He added that if Rowley didn’t want him as CoP, “instead of this hullabaloo,” they could have allowed the issue to go to Parliament and “just reject me.”

Instead, he said they went for “character assassination with fake reports by hand-picked people to report on what they wanted and leak it to the PR team in the Express newspaper in the hope the country rejected me. They did not.”

Griffith said people in the country were fed up of the “ketchup and mustard” parties on offer and were seeking an alternative. He estimated the number of people in this third constituency may be up to 250,000 now.

He said he’d do what is right for the country and hinted he may say in the next few weeks if he would head a political party.

He argued that it was highly unethical for Rowley to give correspondence to the chairman of an independent Police Service Commission after that body had completed its work on a merit list for a police commissioner.

Rowley had described Griffith as “a huge disappointment.”

Yesterday, stopping short of alleging there was misbehaviour in public office, Griffith said, “If anything warrants a probe by a commission of enquiry, this does. We’re talking about possible probe of some of the highest officeholders in the land.

“I know the Prime Minister may allude to it being his right to hand over any correspondence on something to an independent body. But this was not the case here, where the PolSC’s work had been completed on the merit list and he was trying to alter a decision that had already been taken.

“Plus there is the other aspect that this report which was being given to the chairman wasn’t a report from law enforcement. It was a report from civilians who were not a trained forensic investigative team on firearms and being hand-picked could have advanced anything. So in appointing civilians to do such a report and give it to the PolSC, its worth was questionable.”

Griffith said it was not for him to decide if the PM had committed alleged misbehaviour but he cited the issue of the PM’s admission of alleged interference in a letter yesterday to Director of Public Prosecutions (DDP) Roger Gaspard.

The letter conveyed Griffith’s complaint on the T&T Police Service’s failure to launch a probe surrounding his removal from the PolSC merit list for commissioner.

In part of the letter where Griffith alleged wrongdoing occurred, he stated, “The President, by law, when she received the merit list, was obligated to do nothing other than forward it to Parliament. She refused to do so. If she was influenced, intimidated or instructed by anyone to do other than what was law, that public official can be charged for misbehaviour in office.

“The previous PSC chairman rescinded the merit list from the President after delivering it. There was nothing giving her authority to seek to rescind this merit list after it was delivered. If any public official ordered, directed, interfered, influenced, or coerced the previous PSC chairman to rescind the merit list, then that public official can be charged for misbehaviour in office.”

He added, “We are now seeing that the Prime Minister has openly admitted in interfering with an independent process from an independent body, whether it be influencing, intimidating, directing or coercing, it means that he interfered, which can lead to someone being charged. This must be grounds for an investigation.”

In his concerns to the DPP on the TTPS’ failure to probe the merit list issue, Griffith also expressed concern about the appointment of a senior Special Branch officer, who is responsible for the Prime Minister’s security “and who reports directly to the Prime Minister, to be the sole authority to ascertain if these matters warrant an investigation.