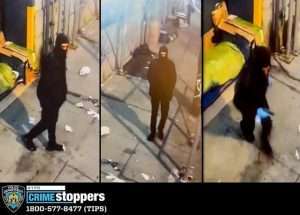 (AP) — A man suspected of stalking and shooting homeless people asleep on the streets of New York City and Washington, DC, was arrested early Tuesday. Police said at least two people were killed and three others wounded in the attacks.

The suspect, Gerald Brevard, 30, was arrested in Washington after news of the killings had added new fears to people spending nights on the streets of the two cities and elsewhere.

Brevard, who lives in the Washington area, has a criminal history that includes an assault arrest, two law enforcement officials said. He was in custody and being questioned by both New York and Washington detectives. The officials were not authorised to discuss the investigation publicly and spoke to AP on condition of anonymity.

Police in the two cities earlier released multiple surveillance photographs, including a closeup showing the suspect’s face, and urged people who might know him to come forward. Investigators used ballistic evidence and tips to help link the shootings, and a tipster called police with information about the suspect’s identity, officials said.

All of the shootings involved .22-caliber bullets, and surveillance photos and video, along with witness statements, all pointed to a single suspect — a man wearing distinctive sneakers, black pants and the same face mask, New York Police Department Chief of Detectives James Essig told reporters.

New York detectives were in Washington and participating in interviews with the suspect, Essig said. But investigators did not immediately find anything further connecting the suspect to New York. Nor any social media postings or other evidence explaining a motive.

DC Mayor Muriel Bowser and New York City Mayor Eric Adams credited the swift coordination between the two police departments and the federal Bureau of Alcohol, Tobacco, Firearms and Explosives. ATF agents took Brevard into custody around 2:30 am Tuesday morning before handing him over to detectives in Washington.

“This man targeted those experiencing homelessness with no regard for life, but this criminal is now off the streets,” Adams said Tuesday. “Gun violence against anyone, let alone our most vulnerable populations, is sick, but thanks to the coordination between different levels of law enforcement and the public’s help, those experiencing homelessness can breathe a sigh of relief today.”

Advocates for the homeless found comfort in the arrest but urged officials in both cities, which have significant populations of people without permanent shelter, to provide more assistance.

“The urgency of helping people move in off the streets must remain, because this is only the latest example of the risks faced by people without housing,” said Jacquelyn Simone, policy director for the Coalition for the Homeless in New York City. “It’s not the first time that people have been the victims of violence or even homicides because of their housing status.”