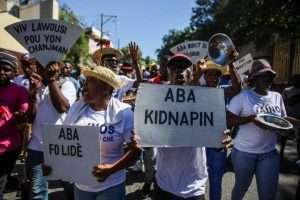 (AP) — Thousands of doctors, nurses and other health professionals across Haiti have gone on strike to protest a spike in gang-related kidnappings as supporters burned tires and blocked roads on Tuesday.

The three-day strike that began on Monday shut down public and private health institutions in the capital of Port-au-Prince and beyond, with only emergency rooms accepting patients.

“We are living a catastrophic situation where no one is protected,” said Dr Louis Gerald Gilles, who closed his private practice on Tuesday in the neighborhood of Delmas to protest the recent kidnappings of two doctors. “No professional is protected. Today it could be a doctor, tomorrow they could enter the office of a lawyer or an architect.”

Kidnappings in Haiti increased 180 per cent in the past year, with 655 of them reported to police, according to mid-February report by the United Nations Security Council. Authorities believe the number is much higher since many kidnappings go unreported.

The most recent kidnappings of two doctors spooked the staff at Port-au-Prince’s General Hospital, where union workers gathered on Tuesday and said conditions had become increasingly dysfunctional since the July 7 killing of President Jovenel Moïse.

They accused the administration of Prime Minister Ariel Henry of not releasing sorely needed funds to the Ministry of Health for basic services, adding that they were worried about the lack of security.

“They can walk in here, grab anyone and leave with no worry,” said Guerline Jean-Louis, a 44-year-old hospital janitor who joined the strike. “This is why we support the movement.”

Officials with Haiti’s Ministry of Health could not be immediately reached for comment.

In a recent statement, Haiti’s Medical Association demanded that the government push to have the doctors released without conditions and implement measures to “stop the wave of insecurity that strips us of our fundamental freedom to go freely about our lives.”

One of the doctors was released on Tuesday, although the conditions of his release were not immediately known.

The prime minister has pledged to crack down on the spike in gang violence and kidnappings, with the US and other countries pledging resources and training to help an understaffed, underfunded police force.

The strike by health professionals is scheduled to end on Wednesday, while another strike by the Association of Owners and Drivers in Haiti was expected to start on Thursday to protest theft of vehicles in the community of Martissant, ground zero for warring gangs who have kidnapped or killed several civilians, many of them aboard public buses.