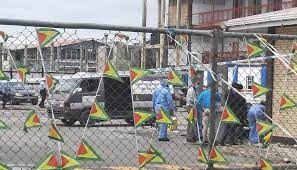 (CMC) – A 49-year-old woman committed suicide at the Brickdam Police Station in Georgetown on Monday following a domestic dispute.

Police said that Trudy DeHaarte, an Animal Inspector with the Guyana Society for the Prevention of Cruelty to Animals, had earlier been in a confrontation with her husband, a taxi driver, and her son.

In a statement, the police said that DeHaarte, had taken an object which was wrapped in a yellow cloth and hit her husband’s motorcar. The man then drove to the Brickdam Police Station to make a report and DeHaarte followed him.

Upon her arrival at the station, the woman is reported to have told her husband “this is what you want” before shooting herself. She was pronounced dead at the scene by Government Medical Officer, Dr Narine.

Police said the weapon used by the victim was a stun gun, which she had in her possession and used during her job as an animal inspector.

Home Affairs Minister, Robeson Benn, who visited the scene, said it was a very unfortunate situation that will be fully investigated by the police.

“The woman, up to the time of her death, was receiving treatment at the Georgetown Public Hospital Psychiatric Clinic,” the police said.