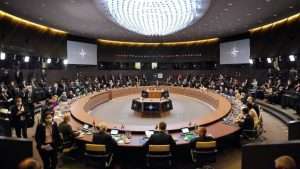 (CNBC) – The heads of state representing NATO’s 30 member countries are discussing meeting in person in Brussels next week as Russia’s invasion of Ukraine reaches the alliance’s doorstep with missiles fired just miles from the border of Poland, according to U.S. and foreign officials.

The meeting, which would be labeled “extraordinary” by the alliance since it falls outside regularly scheduled engagements, would dovetail with the White House’s tentative plans for President Joe Biden to travel to Europe.

President Biden’s travel and the NATO meeting have yet to be finalized, these officials said, asking not to be named because the plans aren’t yet set.

The meeting would serve as a high-level show of force for NATO countries, which have forged a stronger bond in response to Russia’s unprovoked attack on neighboring Ukraine. The U.S. has vowed to defend the entirety of the alliance, even in the case of accidental fire.

“The United States will work with our allies to defend every inch of NATO territory, and that means every inch,” National Security Advisor Jake Sullivan said in an interview on “Face the Nation” on Sunday. “And if there is a military attack on NATO territory, it would cause the invocation of Article Five, and we would bring the full force of the NATO alliance to bear in responding to it.”

NATO defense ministers are scheduled to meet on Wednesday.