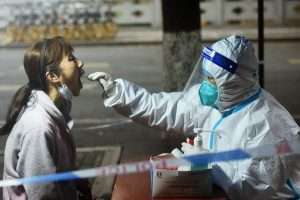 (AP) – Chinese authorities on Tuesday tightened anti-virus controls at ports, raising the risk of trade disruptions after some auto and electronics factories shut down as the government fights coronavirus outbreaks.

Stock prices in China and Hong Kong sank for a second day following the shutdown on Monday of Shenzhen, a tech and finance hub adjacent to Hong Kong in the south, and Changchun, an auto centre in the northeast. Bus service to Shanghai, China’s business capital and biggest city, was suspended.

China’s case numbers are low compared with other major countries or Hong Kong. But authorities are enforcing a “zero tolerance” strategy that aims to keep the virus out of the country. It has temporarily shut down major cities to find every infected person.

The restrictions come at a time when the global economy is under pressure from Russia’s war on Ukraine, surging oil prices and weak consumer demand.

“We can think of no risk to the global economy, excluding nuclear warfare, that is greater than the risk of a COVID outbreak in China that shutters industrial production,” said Carl B. Weinberg of High-Frequency Economics in a report. “Uncountable manufacturing supply chains pass through China.”

Economists say, for now, smartphone makers and other industries can use factories and suppliers in other parts of China. But a bigger threat looms if business is disrupted at ports in Shenzhen, Shanghai or nearby Ningbo.

They link Chinese factories that assemble most of the world’s smartphones and computers, as well as medical devices, appliances and other goods, with foreign components suppliers and customers. A one-month slowdown at Shenzhen’s Yantian Port last year caused a backlog of thousands of shipping containers and sent shockwaves through global supply chains.

“The risk here is whether COVID will be found at Yantian Port,” said Iris Pang, chief China economist for ING. “If the port has to be suspended, it will affect a lot of electronic imports and exports.”

There was no sign of major disruption, but port operators announced curbs on face-to-face contact with shippers and sailors.

The agency that manages the Shanghai port closed windows where customers submit documents and said that function would go online. It gave no indication cargo-handling or other operations were affected.

The port of Lianyungang, north of Shanghai, announced foreign sailors were barred from leaving ships or using the city to change crews.

Shenzhen suspended cross-border freight service at the Liantang crossing into Hong Kong. It said the Man Kam To crossing would be limited to handling fresh and live food to make sure Hong Kong gets adequate supplies.

“The lockdown of Shenzhen creates significant risks of supply chain disruptions,” said Rajiv Biswas, chief Asia economist for IHS Markit, in an email. The risk of global disruption “would escalate if authorities in Shanghai also decide to implement a lockdown.”

The number of new cases reported Tuesday on the Chinese mainland more than doubled to 3,507. Nearly 90 per cent were in Jilin province, where Changchun is located, with 2,601 cases.

Hong Kong, which reports separately, had 26,908 cases on Monday.

The Yantian Port tried to reassure customers operations were normal. A statement on its social media account promised to “make every effort to ensure the smoothness and stability of this ‘lifeline for port supply.'”

China, where the pandemic started in late 2019 in the central city of Wuhan, became the first major economy to rebound after Beijing closed factories, shops and offices to contain the disease.

This year, the ruling Communist Party’s growth target is 5.5 per cent. If achieved, that would be well below last year’s 8.1 per cent expansion. But forecasters consider it aggressive at a time when construction, which supports millions of jobs, is in a slump due to a crackdown on debt in the real estate industry.

Leaders are promising tax cuts for entrepreneurs and higher spending on building public works. That might help to boost consumer spending and cushion the economy from a slowdown in manufacturing.

All businesses in Shenzhen and Changchun except those that supply food, fuel and other necessities were ordered to close. Bus and subway services were suspended. Millions of residents were told to undergo virus testing.

Anyone who wants to enter Shanghai, a city of 24 million people with auto factories, China’s biggest stock exchange and offices of global companies, must be tested.

Elsewhere, the populous eastern province of Shandong had 106 new cases on Tuesday. Guangdong in the south, where Shenzhen is located, reported 48. Shanghai had nine and Beijing, six.

Jilin province, where Changchun is located, has barred residents from leaving the province and from traveling between cities within it.

Automakers Volkswagen and Toyota, iPhone assembler Foxconn and smaller companies have announced they are suspending production at some factories.

Others including telecom equipment maker Huawei Technologies Ltd., Apple Inc., General Motors Co. and electric vehicle brand BYD Auto didn’t respond Tuesday to questions about how they might be affected.

“The risk of broader lockdowns is increasing,” Bank of America economists said in a report.

Volkswagen AG said Changchun factories for the VW and Audi brands shut down from Monday to Wednesday.

Shenzhen, a city of 17.5 million people, is home to some of China’s biggest companies including Huawei, BYD Auto, Ping An Insurance Co. of China and Tencent Holding, operator of the popular WeChat message system. Taiwanese-owned Foxconn, which assembles Apple’s iPhones, has its China base in Shenzhen.

Foxconn assembles some smartphones and tablet computers in Shenzhen but has moved most production out of the city. Other manufacturers also have shifted to less expensive parts of China or abroad. They keep research and development, finance and marketing in Shenzhen — functions that can be done by employees working from home.

“Manufacturing is in other places, so unless all of China is affected by COVID, it is not going to be really a shortage of particular goods. For example, phones,” said ING’s Pang.

Also, authorities appear to be trying out a “dynamic ‘zero COVID’ policy” that still aims to keep out the virus but uses “targeted lockdowns” to try to reduce the economic and social cost, said David Chao of Invesco.

“Many see this as a huge COVID risk that could potentially cause further weakness in the Chinese economy,” said Chao. “But I think this gives policymakers the opportunity to evolve their pandemic policies.”