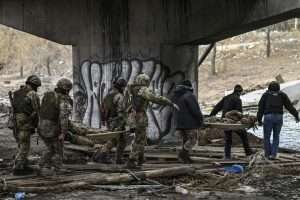 (AFP)— Russia widened its targets in Ukraine on Sunday with strikes on a military base just miles from the Polish border, as a top Ukrainian advisor said the capital Kyiv was itself now “a city under siege.”

Meantime, the death toll in the strategic southern port city of Mariupol, facing acute deprivation amid a prolonged siege, has topped 2,000, officials there said.

While western Ukraine has largely been spared so far, Russian air strikes overnight carried the war deep into the west, killing 35 people at a military base near Yavoriv, outside the city of Lviv — which is dangerously close to the frontier with EU and NATO member Poland, local officials said.

The latest fighting in Kyiv’s suburbs left a US journalist dead — the first foreign reporter killed since Russia’s invasion of its neighbour on February 24.

“Kyiv. A city under siege,” presidential advisor Mykhailo Podolyak wrote on Twitter. He said the city was preparing a “ruthless defence”.

Meanwhile, efforts continued to get help to Mariupol, which aid agencies say is facing a humanitarian catastrophe.

A humanitarian column headed there had to turn back again on Sunday, a city official told AFP, after the Russians “did not stop firing.”

A total of 2,187 residents have now died in days of relentless Russian bombardment, the city council said Sunday.

Ukrainian President Volodymyr Zelensky has accused Moscow of both blocking and attacking humanitarian convoys, although he said Sunday that another 125,000 people had been evacuated that way across Ukraine.

“Russians are bombing the city even during official negotiations,” Defence Minister Reznikov said. “They have no dignity, no honoUr, no mercy.”

Talks between the two sides have yet to yield a ceasefire, but Russia said Sunday that negotiators were making headway at talks in neighbouring Belarus.

Zelensky said Saturday that Russia had adopted a more positive and “fundamentally different approach” in the talks.