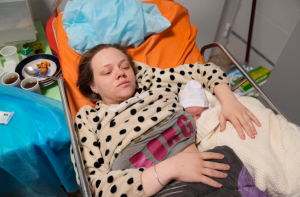 (NEW YORK POST) –  blood-covered pregnant woman pictured fleeing the deadly blast that hit her maternity hospital this week has given birth to a baby girl amid ongoing airstrikes in the “apocalyptic” Ukrainian city of Mariupol.

Mariana Vishegirskaya was photographed in a makeshift hospital room Friday as her husband lovingly held their daughter, Veronika.

The new mom was still wearing the polka dot-patterned pajamas that she was photographed in as she made her way out of the blown-apart hospital Wednesday, with blood across her shellshocked face.

The attack — condemned by Ukraine President Volodymyr Zelensky as an “atrocity” and a “war crime” — killed three people, including a young girl, while injuring 17 others.

“They are ok, but it’s very cold in Mariupol and the bombing doesn’t stop,” the journalist said of the city that the Red Cross described as so devastated it looks “apocalyptic.”

Tokaryuk said the new mom was harassed by people “completely deprived of humanity.”

Twitter eventually removed the series of posts after complaints from the UK government, with a spokesman for Prime Minister Boris Johnson calling it clear “disinformation.”

Zelensky stressed that those killed and injured were “children, women, medical workers,” and Vice President Kamala Harris on Thursday highlighted the attack as proof that Russia “absolutely” should be investigated for war crimes.