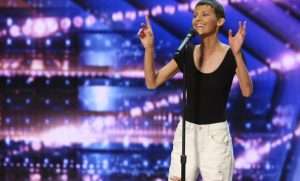 (USA TODAY) – Hundreds of Jane Marczewski’s fans and friends from across the country gathered Friday to pay their final respects to the singer known as Nightbirde.

Marczewski, 31, died Feb. 19 after a four-year battle with cancer. While her voice took her to various places across the U.S., including Nashville and, later, California, when she made her famous Golden Buzzer “America’s Got Talent” audition, her celebration of life took place in central Ohio.

“We wanted to do it in the church where she spent a lot of time when she was here,” said her eldest brother, Mitch, who helped organize the event. It was also livestreamed on YouTube, with thousands of viewers following along.

Friends and strangers began gathering 20 minutes before the doors opened for the 6:30 p.m. service. Inside, the lobby was decorated with photos of Marczewski, smiling with what her father, Mitchell, referred to as her “million dollar smile.”

Programs featured black-and-white photos of Jane with an original poem she’d written, “A Hero In Flames.”

With dignity and urgency and stubbornness

A watercolor portrait in the night

A sight to behold, a hero in flames.”

The evening began and ended with music. In between was a mixture of laughter, tears and gently murmured “Amens” as the faith for which she was known reverberated throughout the sanctuary.

“If … our admiration for Jane stops at Jane, we’ll be missing something very major, because Jane was a reflection of the Jesus that she loved,” pastor Todd Garman said. “The reason she was so magnetic, magnanimous, others-centered, servant hearted, intentional, was because she was imitating — imperfectly — the Jesus of the Scriptures.”

Loved ones from various time periods in Marczewski’s life shared entertaining stories to illustrate her fun-loving, spontaneous and mischievous personality.

Her best friend of 14 years, Abby Hernandez, called Marczewsk “magnetic, vibrant, selfless, and the most profound friend of my life.”

Last summer the pair got tattoos of a heart that they each drew on the other’s arm — a reminder for Hernandez of the way Marczewski used to ask, “How is your heart?”

“These last couple weeks, as I’ve looked down and seen that reminder of her lasting presence, both emotionally and physically. Now I can’t help but hear her ask me, ‘Abby, how is your heart?’,” Hernandez said. “I have wanted more than anything to look her face to face and tell her how much my heart is breaking since she left this earth. But instead, I’m asking God to relay that message to Jane. So, God, please tell Jane, thank you for being the best friend I ever had, that I miss you.”

‘I’m there to give people a gift.’:Zanesville singer Nightbirde wows America’s Got Talent

Marczewski’s brother, Mitch, described his sister as his best friend. He added that she always knew what to say and was an example of generosity and kindness as she took children from the rougher parts of her college town under her wing.

All of the speakers were quick to point to Marczewski’s faith as a beacon that kept her hopeful, even when her diagnosis was grim.

“Jesus is why she believed a painfully tragic life could still be worth living — that life could be beautiful even when the world came crashing down,” said Marczewski’s friend Celeste Kuriokos.

When she appeared for the first time on America’s Got Talent for auditions that aired in June, she told the judges she had a 2 percent chance of survival, with cancer in her lungs, spine and liver.

“But 2% isn’t 0%. Two percent is something and I wish people knew how amazing it is,” she told the judges at the time.

That evening she earned the coveted “Golden Buzzer” from Simon Cowell after performing her original song, “It’s OK.”

Marczewski dropped out of the competition in August to focus on her health and spent her final months with her brother, Andrew, in California. He resigned his full-time job as a software developer in order to devote himself to his sister’s care — a move his family lauded Friday evening.

‘This world has lost something’

Because of her positive experience with cancer treatment in California, Marczewski’s family established The Nightbirde Foundation to help raise money for artists struggling to pay for cancer treatment.

‘Jane was an amazing person’:Zanesville singer and AGT star ‘Nightbirde’ dies at 31

Jane is survived by her parents, Mitchell and Sharon Marczewski; three siblings; and numerous other family members and friends.