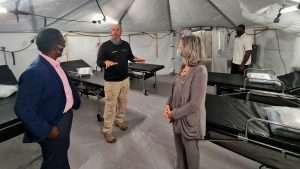 PR – Grenada’s disaster management capacity received a significant boost  Thursday with the donation by the US Government of two field hospitals and two  Emergency Operation Centres (EOCs), valued at US $7.5 million.

The 40-bed hospitals and EOCs were facilitated through the US Southern Command’s  Humanitarian Assistance Programme.

Prime Minister and Minister for Disaster Management, Dr. the Right Honourable Keith  Mitchell, expressed heartfelt gratitude to the US Government and in particular, US  Ambassador to Barbados and the Eastern Caribbean, Linda Taglialatela, for the donation.

He recalled making the request for a field hospital a few months ago and the ambassador  immediately answering in the affirmative.

Referring to the donation as the latest demonstration of US support for Grenada, he said,  “Our countries have a long history of relations and there have been many instances of  generosity over the decades. However, today’s donation is particularly special given the  context of the period that we are in and the challenges facing Governments around the  world. It is therefore heartening that our friends would still come to our aid at this particular  time.”

Over the last few days, more than 20 persons have been trained in the maintenance of  the field hospitals and the Prime Minister welcomed the inclusion of persons from  Carriacou.

He said, “The timing of this donation allows us the luxury of time to ensure that persons  are adequately trained to operate the field hospitals. I know that the trainees have been  involved in very intense sessions over the past few days and I’m quite happy to see the

inclusion of our sisters and brothers from Carriacou, as one of the field hospitals would  be based in Carriacou to serve both sister islands.”

Health Minister, Honourable Nickolas Steele also welcomed the donation and thanked  the United States for its continued support of the health sector. Like the Prime Minister,  he acknowledged the donation as an indication of the longstanding friendship between  the two countries.

In her remarks, the US Ambassador said the past two years have been quite challenging  but the United States has remained firm in its support, donating test kits, personal  protective equipment, thousands of vaccines, and now the field hospitals.

She said the donation enhances the partnership between the US and Grenada and  expressed her country’s ongoing commitment to building and maintaining partnerships to  fight threats that don’t respect borders.