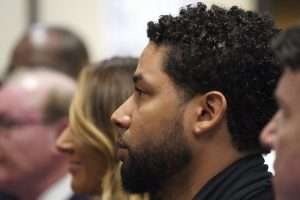 (AP) — Jussie Smollett was sentenced Thursday to 150 days in jail for lying to police about a racist and homophobic attack that the former “Empire” actor orchestrated himself.

Cook County Judge James Linn sentenced Smollett to 30 months of felony probation, including 150 days in the county jail. Linn denied a request to suspend Smollett’s sentence and ordered he be placed in custody immediately.

Smollett was also ordered to pay $120,106 in restitution.

Smollett loudly proclaimed his innocence after the sentence. “I am innocent. I could have said I am guilty a long time ago,” Smollett shouted as sheriff’s deputies led him out of the courtroom, capping an hourslong sentencing hearing.

Jussie Smollett declined to make a statement Thursday during his sentencing hearing for lying to police in a staged hate crime, saying he agreed with his attorney’s advice to remain quiet.

Smollett’s decision came after special prosecutor Dan Webb asked Cook County Judge James Linn to include “an appropriate amount of prison time” when sentencing the actor for his conviction. Webb said he would not ask for a specific amount of time, leaving that to Linn’s discretion.

He also asked that Smollett be ordered to pay $130,000 in restitution to the city of Chicago.

Smollett’s defense attorney Nenye Uche asked Linn to limit the sentence to community service. He said Smollett “has lost nearly everything” in his career and finances and asked that Linn give him time to make restitution if that is part of the sentence.