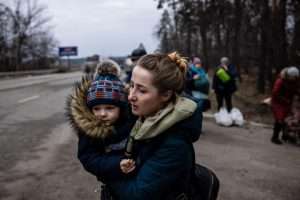 (AFP)— At least 71 children have been killed and more than 100 wounded in Ukraine since Russian President Vladimir Putin launched a war on February 24, a Ukrainian parliament official said on Thursday.

The toll was announced amid outrage over the bombing Wednesday of a children’s hospital in Mariopol that officials said killed three people, including a young girl.

“From the start of the Russian invasion and up to 11:00 am (0900 GMT) on March 10, 71 children have been killed and more than 100 wounded,” Lyudmyla Denisova, parliament’s point person on human rights, wrote in a Telegram message.

The hospital was hit as Mariopol, a southeastern port in Ukraine, is under siege from Russian troops and pro-Russian separatists from the Donbas region of eastern Ukraine.

Sources said 17 adults were also wounded in the bombing.

In Malyn, in the western Zhytomyr region, three children and two other people were killed when seven homes were destroyed in air strikes, according to Denisova, who cited several examples of children dying in air strikes.

On Wednesday night, two women and two children were killed when a shell hit their home in Slobozhanske, a village in the eastern Izium region, Denisova said, adding that a five-year-old girl survived.

In Irpin, not far from the capital Kyiv, a 10-year-old girl was gravely wounded and is fighting for her life in hospital.