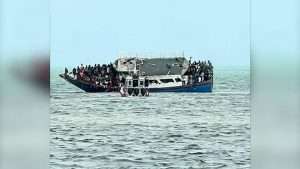 (CMC) – United States law enforcement authorities say they have detained more than 100 Haitian migrants, including children, who were seeking to enter the country illegally by boat late Sunday.

“The condition of the vessel was reported to be in poor condition, not to mention overloaded with migrants, no life jackets or anything on board. All of their lives were in danger during the trip,” said Adam Hoffner of the US Border Patrol.

The authorities said that the wooden boat carrying a large number of Haitians ran aground on Sunday afternoon in the shallow waters off the coast of Ocean Reef Club in the North of Key Largo, ) about 300 metres from shore.

They said there were between 150 to 250 Haitians on board including women and children.

“We do suspect this was a smuggling operation that did depart from Haiti,” Hoffner said, adding “our concern right now is the safety of the migrants”.

The authorities said that an unknown number of Haitians jumped into the sea and swam to shore moments after their boat ran aground.

Some of the Haitians on board the boat needed medical assistance, Chief US Customs and Border Protection Officer Walter N Slosar said.

Despite public appeals and repatriation, Haitians in search of a better life, risk their lives by undertaking the perilous journey by sea in order to reach the United States.