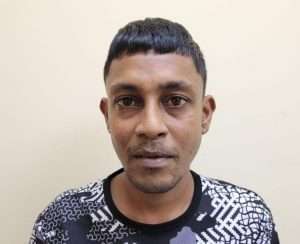 (TRINIDAD EXPRESS) – The body of a man, bound with wire, electrical tape and a belt, was found floating in a river in Longdeville on Sunday.

Police said the body was identified as Suresh Harrickdeo, 39, of Esmeralda Road, Cunupia.

Detectives were told by his family that they last saw him on Friday.

Officers said that Harrickdeo, also known as “Casper”, who was well known to the police for varied offences.

The body bore tattoos of “Casper the Ghost”, and “I Keep You” on the left shoulder, police said.

A police report said that at around 4.35 p.m. Cpl Skeete and PC Cole of the Longdenville police post responded to a report of the body seen at a river off Ravine Sable Road.

The body was seen floating face down, clad in a pair of black jeans and blue boxer shorts.

When the body was retrieved from the water, black electrical tape was seen wrapped over the nose and lower half of the face, as well as hands and feet.

There was also wire tied around the hands, and a belt around the feet.

The body was examined by a district medical officer and removed for an autopsy at the Forensic Science Centre, St James, pending testing for the Covid-19 coronavirus.

Also responding to the scene were Insp Rajkumar of the Central Division and officers of the Homicide Bureau of Region III.