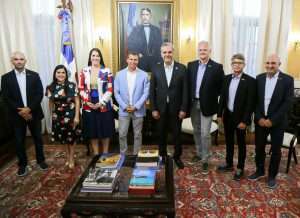 The exploratory visit was at the personal invitation of Her Excellency Angie Shakira Martínez Tejera, Ambassador of the Dominican Republic in Jamaica, who, together with the Ministry of Foreign Affairs in the Dominican Republic and in partnership with Executive Director of ProDominicana, Mrs. Biviana Riveiro, were instrumental in coordinating and designing the agenda to showcase the different destinations and to discover tourism investment opportunities.

During the two-day visit, the SRI team visited various areas of the island including Punta Cana, Miches and Las Terrenas, among others. Although Stewart and other SRI executives had been to the Dominican Republic previously, this marked the first official visit by the Jamaica-based luxury all-inclusive resort company to the destination.

“We thoroughly enjoyed our brief but fruitful time in the Dominican Republic and wish to thank our hosts, especially President Abinader. When leadership at the highest levels makes time to discuss the power of tourism and investment opportunities that expand its reach, we know we’ve found a like-minded partner,” said Stewart.

According to Ambassador Martínez, plans for the visit had been underway for some time, and were of great importance to the Dominican Republic. “Like Jamaica, where Sandals hails from, the Dominican Republic is a revered Caribbean tourism destination and the [tourism] industry is critically important to our economy. It is a dream of ours to have the very prestigious Sandals brand present here. We are honored by the visit and excited by the possibility of our island nation becoming the first Spanish Caribbean territory to welcome the Sandals organization,” said Ambassador Martínez.

Sandals Resorts International is in the midst of a multi-year expansion and innovation plan aimed at strengthening tourism’s return to the Caribbean region. Earlier this year, SRI reopened Sandals Royal Bahamian in Nassau, Bahamas, and will soon unveil its first property in Curaçao on June 1st. Three new resorts are planned for Jamaica, and, in 2023, SRI will unveil a new resort under their Beaches Resorts brand in St. Vincent and the Grenadines. Announced late last year, SRI’s investment of nearly US $200 million will result in 3,000 Caribbean-based jobs, reaffirming the company’s role as a leader and driver of tourism and economic growth across the region, and aligning with plans to double the size of the SRI portfolio in the next decade.

“This was an excellent visit at a time when we are pursuing expansion goals aggressively. We look forward to the possibility of what’s to come,” said Stewart.