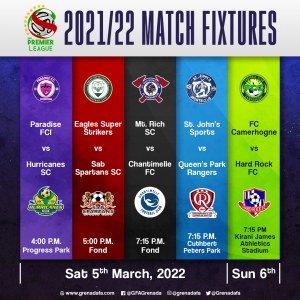 PR – After being bumped down to second place by goal difference,  Hurricanes SC is back at the top of the Premier League points table following 13  rounds of matches.

Hurricanes is now on 34 points following their 3-2 victory over Hard Rock pushing  Paradise FC International down to number two (2) after they drew their  rescheduled match on Wednesday 2nd March against St. John’s Sports 1-1 at  Cuthbert Peters Park.

The first half was goal less for both sides, then St.John’s Sports’ Dwight Joseph  found the net in the 57th minute with Paradise FC’s Steffon Abraham equalizing in  the 76th. Paradise is now two (2) points behind on 32.

In the other match rescheduled from February 26 to March 2, Sab Spartans faced  Mt.Rich SC in their home ground Victoria Park and were defeated 3-2 in the closely  contested match.

The following are the Premier League matches scheduled for Saturday March 5 and Sunday March 6, 2022:

The GFA advises that currently no fans are allowed at matches on the advice of the  Ministry of Health.