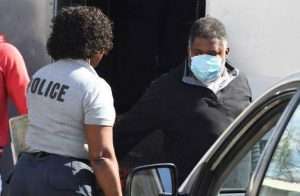 (JAMAICA GLEANER) – John Joel Joseph, the former Haitian senator linked to the assassination of President Jovenel Moïse, has been remanded on immigration charges until March 10.

Joseph’s wife, Edume, 38, and their sons — Schopenhauer, 17, and a nine-year-old boy — were also remanded on similar charges.

An asylum application has been made for Edume and the children.

When they return to court on March 10, they will get an update on the asylum application.

In court Thursday, a representative from the Passport Immigration and Citizenship Agency told senior parish judge Lori-Ann Cole Montague that the application has been received and is being processed.

However, the agency first has to interview the applicants.

Attorney Donahue Martin had agreed for the accused to be interviewed Thursday afternoon.

The lawyer pointed out that the application for refugee status was sparked by safety concerns for his clients.

He said they fled Haiti after a gunman attacked Mrs Joseph.

The judge has expressed frustration over the delay in the matter which would have otherwise been speedily dealt with given that it is a case of illegal entry.

“The older gentleman, I don’t want him here for too long,” said Cole Montague.

Meanwhile, Martin has asked the judge to supervise the process since the matter is sensitive.

He said he made the asylum application on February 3 and the process should not have gone beyond a month.

Martin also told the court that he plans to await the decision on the asylum before dealing with the case of illegal entry against the former Haitian Senator.

The Josephs were apprehended on January 14 during a police operation in Warminster district in St Elizabeth.

John Joel, 59, is listed among five fugitives who are wanted in connection with the president’s assassination.

He is accused of renting four vehicles that were used by the Colombian assassins on the night of the deadly attack.

Moϊse was killed at his private residence overlooking the capital on July 7, 2021.

His wife, Martine Moϊse, was also shot in the incident but survived.

The other key suspect in his murder plot, ex-Colombian military officer Mario Antonio Palacios, was deported from Jamaica on January 3 in keeping with an order by the Supreme Court here after his immigration breach conviction.

Palacios was intercepted in Panama by US law enforcement agents and taken to Florida, where he was charged with various crimes related to Moïse’s assassination.