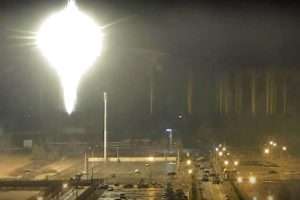 (AP) — Ukrainian firefighters on Friday extinguished a blaze at Europe’s biggest nuclear plant that was ignited by a Russian attack and no radiation was released, United Nations (UN) and Ukrainian officials said, as Russian forces pressed their campaign to cripple the country despite global condemnation.

The head of the United Nations’ atomic agency said that a Russian “projectile” hit a training center at the Zaporizhzhia plant. Ukrainian officials have said Russian troops took control of the overall site, but the plant’s staff are continuing to ensure its operations. International Atomic Energy Agency Director-General Rafael Mariano Grossi said that Russian forces were at the plant, but the Ukrainians were in control.

Ukraine’s state nuclear plant operator Enerhoatom said that three Ukrainian soldiers were killed and two wounded in the attack. Grossi said two people were injured in the blaze that broke out.

Ukraine’s state nuclear regulator earlier said that no changes in radiation levels have been recorded so far after the plant came under attack. Grossi later said no radioactive material was released.

The shelling of the plant came as the Russian military advanced on a strategic city on the Dnieper River near where the facility is located, and gained groundin their bid to cut the country off from the sea. That move would deal a severe blow to Ukraine’s economy and could worsen an already dire humanitarian situation.

With the invasion in its second week, another round of talks between Russia and Ukraine yielded a tentative agreement to set up safe corridors to evacuate citizens and deliver humanitarian aid to the country, overturned by a war that has sent more than 1 million fleeing over the border and countless others sheltering underground night after night. A handful cities are without heat and at least one is struggling to get food and water.

Initial reports conflicted over whether one or two fires broke out at the plant in the city of Enerhodar. Nuclear plant spokesman Andriy Tuz told Ukrainian television overnight that shells fell directly on the facility, and set fire to reactor Number-one, which is under renovation and not operating, and to an administrative training building.

On Friday morning, officials only referenced a blaze at the training building when they said that all fires at the plant were out — which Grossi also confirmed. The regional military administration reported unspecified damage to the compartment of reactor Number-one, but said it does not affect the safety of the power unit.

The nuclear regulator said staff are studying the site to check for other damage.

Grossi confirmed Friday that the building hit was a training center and “not part of the reactor.” He said he did not know what hit the plant but called it a “projectile” from Russian forces.

He said that only one reactor at the plant is operating, at about 60 per cent capacity.

The confusion itself underscored the dangers of active fighting near a nuclear power plant. It was the second time since the invasion began just over a week ago that concerns about a nuclear accident or a release of radiation materialized, following a battle at Chernobyl.

The regulator noted in a statement on Facebook the importance of maintaining the ability to cool nuclear fuel, saying the loss of such ability could lead to an accident even worse than the 1986 Chernobyl disaster or the 2011 Fukushima meltdowns in Japan. It also noted that there is a storage facility for spent nuclear fuel at the site, though there was no sign that facility was hit by shelling.

Leading nuclear authorities were worried but not panicked. The assault led to phone calls between Ukrainian President Volodymyr Zelenskyy and United States (US) President Joe Biden and other world leaders. The US Department of Energy activated its nuclear incident response team as a precaution.

The Zaporizhzhia regional military administration said that measurements taken at 7 am Friday (0500 GMT) showed radiation levels in the region “remain unchanged and do not endanger the lives and health of the population.”

Nuclear officials from Sweden to China also said no radiation spikes have been reported.

“The fire at the (nuclear plant) has indeed been extinguished,” Enerhodar Mayor Dmytro Orlov announced on his Telegram channel Friday morning. His office told The Associated Press that the information came from firefighters who were allowed onto the site overnight.

British Prime Minister Boris Johnson called for an emergency meeting of the UN Security Council in “coming hours” to raise the issue of Russia’s attack on the plant, according to a statement from his office.

In an emotional speech in the middle of the night, Zelenskyy said he feared an explosion that would be “the end for everyone. The end for Europe. The evacuation of Europe.”

But most experts saw nothing to indicate an impending disaster.

The International Atomic Energy Agency said the fire had not affected essential equipment and that Ukraine’s nuclear regulator reported no change in radiation levels.

“The real threat to Ukrainian lives continues to be the violent invasion and bombing of their country,” the American Nuclear Society said in a statement.

Orlov, the mayor of Enerhodar, said Russian shelling stopped a few hours before dawn, and residents of the city of more than 50,000 who had stayed in shelters overnight could return home. The city awoke with no heat, however, because the shelling damaged the city’s heating supply, he said.

Loud shots and rocket fire were heard late Thursday around the plant. Later, a livestreamed security camera linked from the homepage of the plant showed what appeared to be armored vehicles rolling into the facility’s parking lot and shining spotlights on the building where the camera was mounted.

Then there were what appeared to be muzzle flashes from vehicles, followed by nearly simultaneous explosions in surrounding buildings. Smoke rose into the frame and drifted away.

Russian President Vladimir Putin’s forces have brought their superior firepower to bear over the past few days, launching hundreds of missiles and artillery attacks on cities and other sites around the country and making significant gains in the south.

The Russians announced the capture of the southern city of Kherson, a vital Black Sea port of 280,000, and local Ukrainian officials confirmed the takeover of the government headquarters there, making it the first major city to fall since the invasion began a week ago.

Troops, meanwhile, advanced on Zaporizhzhia, a strategic city near the plant of the same name. A Russian airstrike on Thursday destroyed the power plant in Okhtyrka, leaving the northeastern city without heat or electricity, the head of the region said on Telegram.

“We are trying to figure out how to get people out of the city urgently because in a day the apartment buildings will turn into a cold stone trap without water, light or electricity,” Dmytro Zhyvytskyy said.

Heavy fighting continued on the outskirts of another strategic port, Mariupol, on the Azov Sea. The battles have knocked out the city’s electricity, heat and water systems, as well as most phone service, officials said. Food deliveries to the city were also cut.

Associated Press video from the port city showed the assault lighting up the darkening sky above deserted streets and medical teams treating civilians, including a 16-year-old boy inside a clinic who could not be saved. The child was playing soccer when he was wounded in the shelling, according to his father, who cradled the boy’s head on the gurney and cried.

Ukraine’s defense minister said Friday that the flagship of its navy has been scuttled at the shipyard where it was undergoing repairs in order to keep it from being seized by Russian forces. Oleksii Reznikov said on Facebook that the commander of the frigate Hetman Sahaidachny decided to flood the ship.

“It is hard to imagine a more difficult decision for a courageous soldier and crew,” Reznikov said.

Overall, the outnumbered, outgunned Ukrainians have put up stiff resistance, staving off the swift victory that Russia appeared to have expected. But Russia’s seizure of the Crimean Peninsula in 2014 gives it a logistical advantage now in the country’s south, with shorter supply lines that smoothed the offensive there, said a senior U.S. defense official, speaking on condition of anonymity.

Ukrainian leaders called on the people to defend their homeland by cutting down trees, erecting barricades in the cities and attacking enemy columns from the rear. In recent days, authorities have issued weapons to civilians and taught them how to make Molotov cocktails.

“Total resistance. … This is our Ukrainian trump card, and this is what we can do best in the world,” Oleksiy Arestovich, an aide to Zelenskyy, said in a video message, recalling guerrilla actions in Nazi-occupied Ukraine during World War II.

At the second round of talks between Ukrainian and Russian delegations Thursday, Putin warned Ukraine that it must quickly accept the Kremlin’s demand for its “demilitarization” and declare itself neutral, renouncing its bid to join NATO.

The two sides said that they tentatively agreed to allow cease-fires in areas designated safe corridors, and that they would seek to work out the necessary details quickly. A Zelenskyy adviser also said a third round of talks will be held early next week.

The Pentagon set up a direct communication link to Russia’s Ministry of Defense earlier this week to avoid the possibility of a miscalculation sparking conflict between Moscow and Washington, according to a US defense official who spoke on condition of anonymity because the link had not been announced.