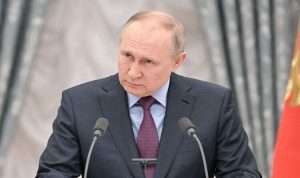 “I promise to pay $1,000,000 to the officer(s) who, complying with their constitutional duty, arrest(s) Putin as a war criminal under Russian and international laws,” said crypto investor and California-based businessman Alex Konanykhin in a Facebook post on Wednesday.

Konanykhin claimed that Putin had violated the Russian constitution by “eliminating free elections” and “murdering his opponents.”

“As an ethnic Russian and a Russia citizen, I see it as my moral duty to facilitate the denazification of Russia. I will continue my assistance to Ukraine in its heroic efforts to withstand the onslaught of Putin’s Orda,” Konanykhin said, using the Russian word for “horde.”

Konanykhin told Insider that he had put up the bounty — which will come from his own funds — to show that the military assault on Ukraine is not being conducted in his name.

“If enough other people make similar statements, it may increase the chances of Putin getting arrested and brought to justice,” he added.

Konanykhin said he has not visited Russia since 1992. When asked about whether he feared reprisal from Putin, the businessman said: “Putin is known to murder his opponents. He has millions of them now.”

According to Vice, Konanykhin was at one point worth $300 million. He is now a member of the “Circle of Money” on the television series “Unicorn Hunters,” along with Apple co-founder Steve Wozniak and former ‘NSync singer Lance Bass.

Konanykhin was granted political asylum in the US in 1999 but ran the risk of being deported when his status was revoked four years later. His asylum status was reinstated in 2007.

Insider’s live blog of the Russian invasion is covering developments as they happen.