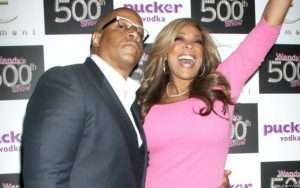 Kevin Hunter was kicked off the show’s production team at the height of his cheating scandal and separation from Wendy Williams wants $7-10 million in damages for wrongful termination.

Kevin Hunter is suing Debmar-Mercury and company executives Ira Bernstein and Mort Marcus in the lawsuit filed in a New York court on Tuesday.

According to his lawsuit, Debmar was founded by Ira and Mort in 2004, and in 2007 they negotiated with Williams and her husband for a six-week trial for a talk show. Hunter, who is not an attorney but has claimed to be his wife’s former manager, claims to have represented her during the negotiations.

“[Kevin] was used to being behind the scenes of Williams’ prior ventures and used his business knowledge and street smarts to negotiate a significant financial increase from the initial contract being offered to Williams,” the suit reads, according to Radar Online.

The lawsuit goes on to say that the talk show premiered in 2008 and was immediately a hit thanks to him as he was also involved in planning the concepts and branding behind the show.

“The Wendy Williams Show dominated the 10 AM daily morning time slot, and to date, no network has been able to beat the Show at this time slot,” the suit reads.

Hunter was credited as executive producer of The Wendy Williams Show from 2007 until 2019. However, he was booted after Williams filed for divorce due to his affair with Sharina Hudson who he also had a child with during the marriage.

Hunter’s lawsuit claims that he created the popular show segmentsHot Topics and Shoe Cam, he selected guests, and also developed marketing plans and activities to increase the show’s ratings.

As a result, he claims that his leadership saw the show increasing its relationship with the African American community because Denmar lacked understanding when it came down to the show’s viewership.

Despite all of the things he was doing, he said the show wrongly terminated him in April 2019.

“The termination of [Kevin] was based strictly upon [Kevin’s] marital status and his impending divorce to the Show’s host, ignoring all of the contributions that [Kevin] made to make the Show a success.”

Hunter also seemed to have issues with Debmar’s ending the Wendy Williams Show and replacing it with the Sherri Shepherd show, which will supposedly use all of the same elements from Williams’ show.

As a result, Kevin Hunter says all of what happened in relation to him being fired led to the show’s downfall because Debmar “underestimated his value.”

It seems that the lawsuit has completely ignored the developments as to Wendy’s health which reportedly declined over the last year.

The show is reportedly ending after the host failed to make a comeback as her handlers noted she was dealing with various health issues long after Hunter was fired.