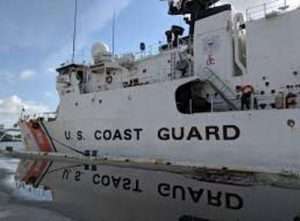 (CMC) – The United States Coast Guard said on Tuesday that it intercepted a Haitian vessel with 179 people aboard about 30 miles off Andros Island, The Bahamas.

The US Coast Guard said the migrants would be transferred to the Royal Bahamian Defense Force.

“The probability of a successful migration voyage is low, and when these voyages are stopped, people should expect to be returned to their country of origin,” he added.