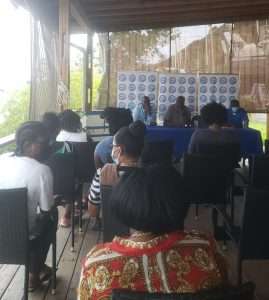 PR – A team from the National Water and  Sewerage Authority (NAWASA), met with residents and business owners in Clarkes Court Bay,  on Monday February 28th, 2022, to appraise them on the pending commencement of the  Clarkes Court Bay Pipeline Upgrade.

The project, scheduled to commence on March 14th, 2022, will see the existing network,  upgraded from two (2) inch to six (6) inch mains, that will improve the volume of supply to the  community, which has for years, complained of challenges with low pressure.

The project, being executed at a cost of two hundred thousand dollars XCD ($200,000.00),  involves the laying of three thousand one hundred and twelve (3,112) feet of six-inch ductile  iron pipes, from the junction with the Woodlands main road, through to the Clarkes Court Bay  Marina, as well as upgrading of the existing lateral lines.

Residents welcomed the project, with many of them referring to the challenges they  experience daily and expressed excitement at the prospects of the upgrade.

NAWASA’s Line Minister Senator Norland Cox, who was part of the delegation that met with  residents, admonished those present to – even with the network upgrade – see the value of  having storage and also to explore the possibility of rain water harvesting, with a view to easing  the stress on the system, in the face of increased demand.

The contract for the execution of the Clarkes Court Bay Pipeline Upgrade, was awarded to  Merryman’s Construction and is expected, once it begins, to be completed in a period of two  months.