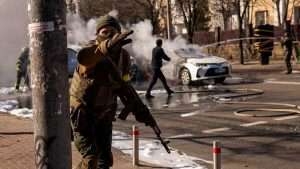 (AFP) — Russian forces said they had captured a port on the Black Sea on Wednesday as Russian and Ukrainian troops battled for another city and Ukraine’s leader said Moscow wanted to “erase” his country.

The Russian army said it had taken control of Kherson, as its troops advanced and pounded cities across southern and eastern Ukraine, defying sanctions and international isolation.

The emergency services said four people were killed in the city on Wednesday and there was now “mass shelling and bombing” in the centre.

In a video address, Ukrainian President Volodymyr Zelensky said Russian forces wanted to “erase our country, erase us all”.

The 44-year-old Zelensky, who is himself Jewish, urged Jewish people around the world to speak up.

“Nazism is born in silence. So, shout about killings of civilians. Shout about the murders of Ukrainians,” he said.

Ukraine says more than 350 civilians, including 14 children, have been killed in the conflict and the International Criminal Court has opened a war crimes investigation against Russia.

The UN said 836,000 people have fled since the conflict began seven days ago, including many students and migrant workers from Africa and the Middle East who had been living in Ukraine.

“We left everything there as they came and ruined our lives,” said Svitlana Mostepanenko, a refugee registering in Prague.

“Our families, they’re bombing even… houses where there are kids, small kids, children, they die now,” she added.

In his first State of the Union address on Tuesday, US President Joe Biden warned the sanctions campaign to cripple Russia’s economy would escalate and its oligarchs were being targeted.

Biden hailed the resolve of the Western alliance and voiced solidarity with Ukraine as lawmakers in the US Congress gave a standing ovation to the Ukrainian people.

“A Russian dictator, invading a foreign country, has costs around the world,” Biden told lawmakers, promising “robust action to make sure the pain of our sanctions is targeted at Russia’s economy.”

But Ukrainian troops have fought back hard and prevented Russia from capturing any the country’s biggest cities.

On Wednesday, however, Russian defence ministry spokesman Igor Konashenkov said Russian forces were in now “full control” of Kherson, a city with a population of 290,000 people.

He said talks were under way between the Russian army and local authorities on maintaining order, protecting the population and keeping public services functioning.

Ukraine’s army said there was a battle in the country’s second city Kharkiv, in northeast Ukraine near the Russian border with a population of 1.4 million.

“There is an ongoing fight between the invaders and the Ukrainians,” the army said on messaging app Telegram.

Ukrainian forces said Russian strikes hit a residential block and a government building in the city on Tuesday killing 18 people, drawing comparisons to the massacres of civilians in Sarajevo in the 1990s and condemnation for what Zelensky called a “war crime”.

As the civilian death toll mounts, there is growing opposition to the conflict within Russia, with thousands detained for taking part in anti-war protests.

“I am urging everyone to take to the streets and fight for peace,” jailed Kremlin critic Alexei Navalny said in a statement posted on Facebook.

He called on Russians not to be afraid of going to prison.

“Everything has a price and now, in the spring of 2022, we should pay that price.”

Western countries have imposed crippling sanctions on Russia’s economy and there have been international bans and boycotts against Russia in everything from finance to tech, from sports to the arts.

The list did not name two major Russian banks, Sberbank and Gazprombank, which were left connected to SWIFT to allow EU countries to pay for Russian gas and oil deliveries.

Sberbank, Russia’s largest lender, said Wednesday it was leaving the European market after coming under pressure from Western sanctions.

The EU and NATO members have also sent arms and ammunition to Ukraine, although they have made clear that they will not send troops and the EU has dampened Zelensky’s hopes of membership of the bloc.

In response to the invasion, Western companies have also withdrawn from projects in Russia, deepening the economic toll on Moscow that saw the ruble collapse this week.

German logistics giant DHL joined them on Wednesday, saying it would stop deliveries to Russia and Belarus, which has allowed the passage of Russian troops to attack Ukraine.

“Going forward, Russia will be a pariah, and it’s hard to see how they can restore anything resembling normal interactions in the international system,” said Sarah Kreps, professor at Cornell University.

The invasion has sent global markets into a spiral, with crude surging past $110 a barrel Wednesday and equities sinking.

Aluminium and gas prices hit record highs on supply fears and the Moscow Stock Exchange failed to open for a third day running.

Initial talks between Russia and Ukraine on Monday failed to yield any breakthrough.

Since then, strikes have been reported in Konstantinovka in eastern Ukraine, Bordodyanka near Kyiv and Zhytomyr in central Ukraine.

In an important strategic victory, Russian troops attacking from the Crimean peninsula said they had linked up along the Azov Sea coast with pro-Moscow separatists in eastern Ukraine.

The city of Mariupol was reportedly encircled.

The separatists have been fighting Ukrainian government forces since 2014 in a conflict that has killed more than 14,000 people.

US satellite images show that Russia has massed artillery and armoured cars near Kyiv, raising fears of an imminent assault.

“The enemy is drawing up forces closer to the capital,” Kyiv’s mayor Vitali Klitschko said in a video address.

“Kyiv is holding and will hold. We are going to fight,” he said.