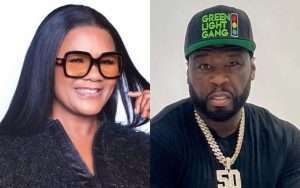 (URBAN ISLANDZ) – Lady Saw wants 50 Cent to pay up for using her classic hit in one of his Power Book II: Ghost episodes.

The former dancehall artiste turn Christian Minister, Marion Hall, is still looking to recoup money owed to her to use one of her songs in the first episode of the spin-off for 50 Cent’s hit series Power, which aired in 2020. Lady Saw has previously spoken out against persons she believed tricked and duped her into signing away her publishing rights for her creative work early in her career.

Lady Saw recounted the moment it went down while speaking to Tamara McKayle on her The Trailblazers Show last November. During the sitdown, she also highlighted different ways in which her music was used without any compensation. She traced her Country hit “Give Me A Reason,” which was released in 1996, to numerous samples and covers which she has not benefitted from.

“Even with Vitamin C -put a smile on your face’…that song was used by Hershey bar. I was in Jamaica watching it play on all these soap operas. Adam Sandler movie, How Stella Got Her Groove Back… Even just recently they used one of my dirty Lady Saw songs in Power with 50 Cent,” she had further highlighted.

Lady Saw, who now operates her own ministry, has confessed to reaching out to rapper, businessman, and tv-show producer Curtis ’50 Cent’ Jackson for information on the use of her 2004 song “Strip Tease” in the first episode of his Power Book II: Ghost, starring Jamaican actor Michael Rainey Jr.

Hall’s latest attempt took place on Instagram, where she praised 50 Cent for being a savvy businessman while asking for clarification on if he paid for the use of the track and to whom.

“I know you got some money for me, for using one of my songs in one of your power episodes. Or you might have given it to someone, who’s been taking my money, and not giving it to me ,cause I haven’t gotten paid for that song ,or any other songs that was used in other movie,” she explained to 50 Cent below a recent post on his Instagram page.

“I use to go by the name lady Saw. With all due respect. I need to know who to go to, so I can collect what is mine. I know you’re a respectable business man, and wouldn’t mind if you could produce a movie about my life. Look me up, and see if my story, interest you. I did send you a private massage before, but I know you must have gotten so many messages, that some gets lost in the trash. I hope this one don’t,” she wrote before sharing her email address.

Hall has major plans for all the money she hopes to recover from her unfruitful deal. The minister, who now does most of her sermons on social media platforms, has her eyes set on owning and spearheading her brick-and-mortar building of worship. She also believes her remarkable story could be transformed into a tv show by 50 Cent. The G-Unit rapper’s depiction of Detroit brothers Demetrius and Terry Flenory in his hit tv show BMF has already led to other offers.

As of late last year, 50 Cent was working to develop a new show, A Moment in Time: Murder was the Case, a portrayal of Snoop Dogg’s 1993 murder trial.