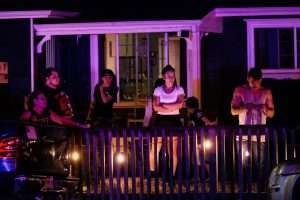 (NEW YORK POST) – Five people are dead after a man killed his children inside a California church before turning the weapon on himself on Monday, reports said.

The gunman fatally shot the group, including three children under the age of 15, inside The Church of Sacramento at about 5 p.m., according to law enforcement officials.

The fourth victim was reported to be chaperoning the children, but that person’s relation to the shooter was unclear early Tuesday.

A law enforcement source told NBC News that the gunman used an AR-15-style semiautomatic rifle in the tragic attack.

“We have found now there’s an adult male, a father who has shot and killed his three children under the age of 15,” said Sgt. Rod Grassmann with the Sacramento County Sheriff’s Office.

“This was not a random shooting,” Grassman said, adding that the shooter and victims “all knew each other.”

Grassman also said that the shooter had a restraining order filed against him.

“This is as far as I can see, at this point, a domestic violence-related sort of incident,” he said.

A church worker heard gunshots at around 5:07 p.m. and called the police.

California Governor Gavin Newsom addressed the violence on Monday and mourned the loss of the children.

“Another senseless act of gun violence in America – this time in our backyard,” Newsom tweeted. “In a church with kids inside. Absolutely devastating. Our hearts go out to the victims, their families and their communities.”

A witness reported seeing one victim being removed from the church, the report said.

A massive police presence could be seen near the location Monday night as the scene remained active.