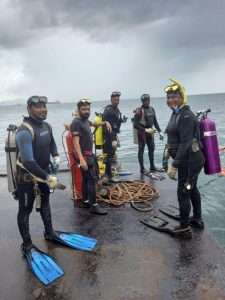 (CNC 3) – After two days of searching for four members of an underwater maintenance crew, the Paria Fuel Trading Company has given up hope of finding them alive and now moves to recover their bodies.

During a press conference at the Pointe-a-Pierre Staff Club at Pointe-a-Pierre Refinery, Paria said the recovery operations will begin today using a water displacement method to move the bodies out of the 30-inch submarine pipeline.

Chairman Newman George said Paria’s engineering team was designing the recovery procedure intended to ensure the uninterrupted movement of the bodies to the point of recovery.

George said Paria came to this decision after a lengthy meeting between Paria, LMCS, the Coast Guard and two independent diving experts.

He said the company sent probes into the horseshoe-shaped line but it encountered something at a certain depth and could go no further. They believe the men’s bodies could be there and will insert pressurised water into the pipeline, hoping to lift the bodies out.

“Based on advice from all the experts, the operation has now moved from rescue to recovery. The experts have also agreed on a joint effort which will see a water displacement process being used to gradually push the bodies along the 400-metre pipeline to where they can be successfully recovered at Berth 6,” George said.

Paria’s General Manager Mushtaq Mohammed said during the meeting yesterday, members determined it was too risky to send divers to attempt rescue operations without first determining the condition in the pipeline. Mohammed said Paria used various technologies, including sending cameras and underwater crawlers to ascertain the conditions.

He said there was no concrete evidence that the men were dead, but the information collected indicated that the probability of survival was very low. He said the risk of rescue was also high and intolerable.

“The decision was made after careful consideration to two key factors: the extremely low likelihood of survival and the risk of placing human life in danger in furtherance of a rescue objective. Our focus now is to treat these bodies with respect during the process of recovery and return to their loved ones. We also place particular emphasis on not placing any persons in harm’s way during these operations,” Mohammed said.

He said the company will be very respectful to the bodies of the men in the manner in which the recovery procedure is done, noting that they will be careful not to damage the bodies in the process.

Around 2.30 pm Friday, Christopher Boodram, Fyzal Kurban, Rishi Nagassar, Yusuf Henry, and Kazim Ali Jr, all employees of private contractors from LMCS Ltd, were conducting an underwater maintenance exercise at the No 36 Sealine riser on Berth #6 at the company’s Pointe-a-Pierre facility.

An incident occurred, which sucked them into the pipeline. Ali Jr is the son of LMCS’s managing director Kazim Ali.

Boodram was recovered in the pipeline, and up to yesterday, he remained in a stable condition at the San Fernando Hospital. He indicated that his colleagues were also in the pipeline. Paria said it immediately implemented a response aided by the coast guard, Fire Service, and commercial diving experts. Mohammed confirmed that an emergency diver responded when they lost sight of the men was unsuccessful in finding them.

Paria’s management extended condolences to the missing men’s families. They said counselling is available to them.

Immediately after the Paria news conference political activist Phillip Alexander head of the Progressive Empowerment Party called on Acting Police Commissioner McDonald Jacob to open a criminal investigation into Paria and its response to the situation involving the divers.

Angry relatives who sat alongside Alexander accused Paria officials of being secretive about the situation and denied that they were told before the news conference that Paria had changed the mission from rescue to recovery. They insisted they only learnt that it had been changed to recovery via the news conference.

They also said it was insulting that Paria officials went to a news conference and extended condolences to the families without first meeting with the families of the men or without confirmation that the men were dead.

Alexander also questioned why it took 54 hours for Paria to come to the press rather than having addressed the situation on Friday night.

Alexander also said a private hospital had been identified to accommodate Christopher Boodram, the lone survivor who has now become an important witness to what happened on that fateful Friday.

Relatives of the missing men said it was curious that all of a sudden they were hearing that Boodram had tested positive for COVID-19.