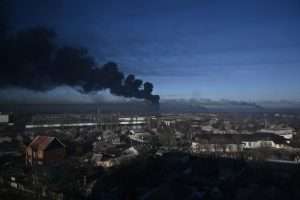 PR – The Organisation of Eastern Caribbean States (OECS) and its Member States strongly condemn the ongoing military operations being conducted against Ukraine by the Russian Federation.

The OECS staunchly upholds and defends the bedrock principles of international law that are enshrined in the United Nations Charter. Paramount among these principles are sovereignty, territorial integrity, non-interference in the internal affairs of States, non-intervention, and the peaceful settlement of all disputes, utilizing the established multilateral and diplomatic mechanisms that undergird international cooperation.

As a collection of small island states with no military presence, and as the theater for past interventionist and military actions, the members of the OECS are acutely aware that our existence as independent, sovereign States is heavily dependent on unanimous global adherence to these immutable principles.

At a time when the world most needs peace and international cooperation to face the twin hydras of climate change and an unending pandemic, war in any region obstructs the imperative of global cooperation.

The impact of this military conflict will extend well beyond the borders of Ukraine and the Russian Federation. The centrality of Ukraine and the Russian Federation to global supply chains, energy production and the supply of commodities like wheat means that the entire developing world, including the OECS, will suffer economically, and experience greater energy and food insecurity for the duration of this conflict.

The OECS calls for the immediate cessation of all hostile and provocative actions against Ukraine, and the withdrawal of all military and proxy forces from Ukraine’s existing, defined borders. We call further on all parties involved to urgently revert to dialogue and diplomacy as the only acceptable channels for arriving at a common understanding that will lead to the maintenance of peace.