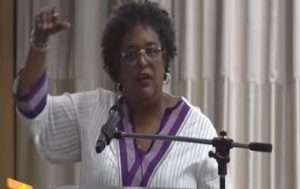 (CMC) — Barbados’ Prime Minister Mia Mottley has called for the Caribbean to remain as a zone of peace as she criticised Russia’s invasion of Ukraine, insisting that Ukrainians “have a right to self-determination without the interference of others”.

“We live in a world, where whether it is in our part of the world or far afield, people feel free to interfere with other people’s business and to make judgements and to make determinations as to who can lead and who shall live and who shall not live,” Mottley told the convention of the ruling New National Party on Sunday.

“And that is why we speak today about friends of all and satellites of none and on principles meaning something. Because in the same way we stood up as Caribbean people to protect the rights of Venezuelan people not to have people interfere in their matters and to appoint a president who was not elected by the people of Venezuela, we stand up today equally to say the people of Ukraine have a right to self-determination without the interference of others.”

“It is perhaps appropriate that I speak on these matters from Grenada,” Mottley said in an apparent reference to the 1979 overthrow of the Eric Gairy government by the New Jewel Movement, led by Maurice Bishop.

The People’s Revolutionary Government came to an end in 1983 when his deputy Bernard Coard staged a palace coup, resulting in the death of Bishop and several other members of the government. The United States then launched an invasion of the island to restore democratic rule.

Mottley said Grenadians know more than any other people in the Eastern or Southern Caribbean that the days of the Caribbean Sea “being the staging ground for the conflict between great imperial powers…and must not be allowed to be resurrected at all”.

“We have had too many conflicts and too many Caribbean people have died over centuries because of the battles fought in this sea and I trust and pray that we will be able with a single voice to speak to these issues because our people need it and depend on us to ensure that we can create that cocoon that protects our people who for centuries have just had too much of being collateral damage for the benefit of other people’s prosperity and ambitions,” Mottley added.