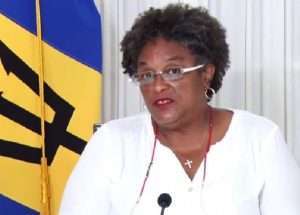 (CMC) – Barbados Prime Minister, Mia Mottley, says her administration will be taking measures to brace for the possible impact of the unrest in Ukraine and Russia.

According to Mottley, the unrest could have implications for the cost of fuel and food, the supply of food and result in disruptions in the supply chain globally.

Speaking during Saturday’s COVID-19 update, however, she noted that Barbados’ reserves stood at over US$3 billion, representing about 37 weeks of import cover, giving the country the ability to have adequate buffers to deal with the capacity to manage any increased prices.

Mottley assured Barbadians that the situation was being monitored for some time, and meetings with the private sector had already taken place since last year.

In addition, she noted that efforts were being undertaken by the Ministry of Agriculture, Food and Nutritional Security to boost food production in the country to ensure Barbados was in a better position to feed its citizens.

The Prime Minister also said that during her recent trip to Guyana, discussions were held about the urgent importance of having the Barbados/Guyana Food Terminal established.

She further noted that a recent Council for Trade and Economic Development (COTED) meeting also examined plans that would allow Barbados to produce 25 per cent of food that was currently being imported by 2025.

“The urgency of the moment with the Ukraine crisis is undoubtedly there. But we have been preparing for some time for this unstable world, which has led to increases in food prices….”

The Prime Minister also disclosed that she would address the public in another two weeks on how the Government intends to help contain cost of living issues, particularly as it relates to food.

“It is not the worst news, but we are prepared to do what has to be done at the macro level and also with respect to cost of living for households as we go forward,” Mottley stated.