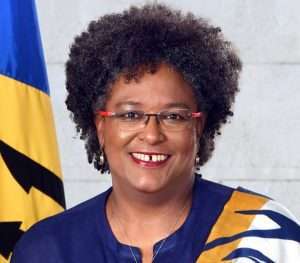 PR – Director General of the Organisation of Eastern Caribbean States (OECS) Dr. Didacus Jules has congratulated Prime Minister Mia Mottley, on her resounding victory in the January 19, 2022 General Elections in Barbados. In his congratulatory remarks, Dr. Jules highlighted the Prime Minister’s contribution in advocating for action in relation to the vulnerabilities of Small Island Developing States (SIDS).

The Organisation of Eastern Caribbean States extends sincere congratulations to Prime Minister Mia Amor Mottley and the Barbados Labour Party on their historic and decisive victory in the recently held General Elections. Since her assumption of the leadership of the Government of Barbados, Prime Minister Mottley has become a compelling voice and a commanding presence on the international stage, championing the cause of SIDS and drawing attention to their vulnerabilities with unflagging energy.

The OECS looks forward with anticipation to the deepening of cooperation with Barbados and extends best wishes for success in the pursuit of the developmental aspirations of the Government and people of Barbados.

Prime Minister Mottley and the Barbados Labour Party created history by capturing all thirty (30) seats in the House of Assembly for the second consecutive election.