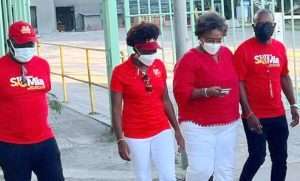 (CMC) – Barbadian voters bought into the philosophy that they are “safer with Mia” wholesale and re-elected the ruling Barbados Labour Party (BLP) into government with a consecutive clean sweep of the 30 seats in Parliament.

Preliminary results showed that the BLP had won all the seats in the election that Prime Minister Mia Mottley called 18 months ahead of the constitutional deadline and in the process allowed the party to become only the second political organisation in the Caribbean to sweep all the seats in an election on consecutive occasions.

The other time that has been achieved was in Grenada when Prime Minister Dr Keith Mitchell led his New National Party (NNP) in winning all 15 seats in 2018.

Mottley made it seven out of eight victories in the St Michael North East constituency, easily defeating the Democratic Labour Party (DLP) candidate, Damien Griffith by a margin of 3216 to 476. Roy Turney of the BFP polled 48 votes.