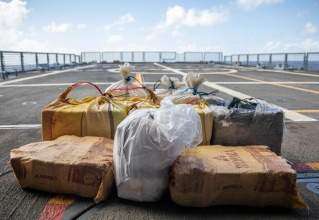 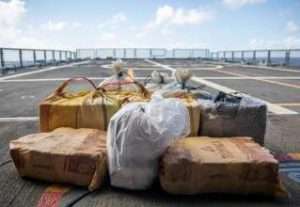 (CMC) — The Miami-based United States Naval Forces South Command said it has seized an estimated US$22 million in cocaine during an operation in the Caribbean Sea.

The US Navy said in a statement that the exercise took place last week and that the combat ship USS Milwaukee (LCS 5), assisted by the US Coast Guard (USCG) Law Enforcement Detachment (LEDET), 402 intercepted the drug smuggling go-fast vessel (GFV).

“The LEDET observed packages jettisoned into the water and then gained positive control of the GFV. After receiving permission to conduct a boarding, they recovered the packages and five suspected drug traffickers were detained,” the statement said, estimating the seizure to be 315 kilograms.

“It is a good feeling knowing that a large number of drugs will not make it onto the streets of America or our partners in the Caribbean,” said USS Milwaukee Commanding Officer, Brian Forster.

“We are very pleased with the effectiveness of everyone’s response and the integration of all parties involved,” said Lieutenant Jordan Lachowsky, the LEDET’s officer in charge, adding “we are looking forward to more opportunities and more successes in the near future”.

The US Navy said the USS Milwaukee was deployed to the US 4th Fleet area of operations to support Joint Interagency Task Force South’s mission, which includes counter-illicit drug trafficking missions in the Caribbean and Eastern Pacific.

The US Navy said that on April 1, 2020, the US Southern Command began what was then known as Enhanced Counter Narcotics (CN) Operations in the Western Hemisphere to increase the disruption of illegal drug trafficking and “to maintain access, enhance interoperability, and build enduring partnerships in order to enhance regional security and promote peace, stability and prosperity in the Caribbean, Central and South American region”.