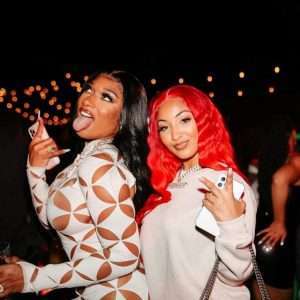 (JAMAICA OBSERVER) – Just months after she was featured on Kanye West’s Grammy-nominated album, DONDA, dancehall star Shenseea has once again landed another huge international feature. This time, the ‘Trending Gyal’ has teamed up with the leader of the ‘Hotties’, Megan Thee Stallion.

Shenseea, who is now being managed by Wassim “Sal” Slaiby also known as Salxo (who also manages The Weeknd and Doja Cat), made the revelation in an Instagram post on Tuesday night.

The single titled Lick is expected to be released on Friday, January 21.

Since the announcement, the collab has been generating a lot of interest with the likes of actress Taraji P. Henson commenting that she is “patiently waiting” for the single to drop.

The collaboration may come as no surprise as Shenseea and Meg Thee Stallion have been seen hanging in the same social circles in recent times.

In November 2021, Meg Thee Stallion tweeted that she “definitely” wanted to collaborate with the Shenseea on a track.

Shenseea who is gearing up to release her debut album has hinted at some huge international bangers with some musical powerhouses.