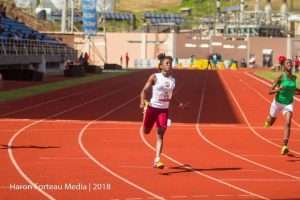 PR – Cece Charles, a former MacDonald College athlete who blazed the track for many years, will leave for Arizona, United States on an athletic  scholarship on Sunday, January 16.

Charles has represented Grenada at the regional level, including at the Caribbean Union of  Teachers (CUT) Games, Windward Islands Secondary School Games and the CARIFTA Games.

The 19-year-old athlete is an above average student, having achieved 10 subject passes at CSEC.  Acting Principal at MacDonald College, Carl Andall, said Charles is talented, disciplined and has  what it takes to excel.

Andall said Charles has been working under the guidance of longstanding coach, Neville Glean,  for approximately seven years. Glean has worked with well-known athletes such as Rondell  Bartholomew, Neisha Bernard-Thomas, Neilon Joseph and Stephanie Ferguson, who are all  CARIFTA medallists.

Charles will continue her education and athletic development at Central Arizona College.