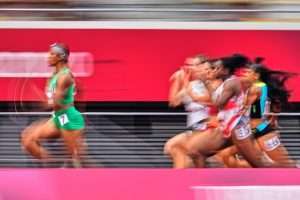 (NEW YORK POST) – Federal prosecutors charged a “kinesiologist and naturopathic” therapist from Texas on Wednesday with providing performance-enhancing drugs to athletes competing in the Tokyo Olympics, including a sprinter who was banned from the Games last summer.

Eric Lira, 41, of El Paso, is the first person charged under a federal anti-doping act signed into law in December 2020, the U.S. Attorney’s Office for the Southern District of New York said in a press release.

Lira is charged with providing banned drugs, including human growth hormone and bacteriostatic (a masking agent), to the athletes, starting in November 2020. Among those was a track and field star, identified only as “Athlete 1” in the federal complaint.

“At a moment that the Olympic Games offered a poignant reminder of international connections in the midst of a global pandemic that had separated communities and counties for over a year … Eric Lira schemed to debase the moment by peddling illegal drugs,” U.S. Attorney for the Southern District Damian Williams said in a statement.

“The promise of the Olympic Games is a global message of unification. Today, this office sends a strong message to those who would taint the Games and seek to profit from that corruption.”

Athlete 1 was not identified, but federal prosecutors said the athlete was banned from running in the 100-meter semifinals at the Olympics.

Nigerian track star Blessing Okagbare, one of the favorites in the event, was banned from further competition after testing positive for HGH at the same time as Athlete 1.

Investigators said Lira got the drugs from Mexico and South America.

He is charged with one count each of international sports doping and misbranding conspiracy because prosecutors said the drugs were allegedly mislabeled “to defraud and mislead” authorities.

Lira lists himself as a managing member of Med Sports LLC, but is not licensed as a therapist in Texas, Florida or New York, the complaint said.

According to the complaint, Athlete 1 reached out to Lira on Nov. 17, 2020, and “requested that Lira provide her with 4 vials or doses of ‘honey,’ ” which federal investigators said is code for human growth hormone.

The request came months before the 2020 Tokyo Olympics, which were delayed a year due to the COVID-19 pandemic and were held in 2021 instead.

In a text message in April 2021, Lira allegedly told Athlete 1, “I will send you the 2 honeys an [sic] 4 bac water,” referring to bacteriostatic water, used to dilute injected medications, the complaint said.

In June 2021, Athlete 1 wrote Lira and told him, “I just sent you $2,500, can you confirm it via Zelle? And also remember I told you [a second unnamed athlete] had hurt his hamstring, so anything that will help the hamstring really fast you can actually bring it as well, ok?”

In another exchange, Athlete 1 wrote Lira about having just run the 100 meters in 10.63 seconds.

“Eric my body feel so good,” the athlete wrote. “Whatever you did is working so well.”

But Athlete 1 ran into trouble in July after testing positive, the feds said.

“Call me urgently,” the athlete messaged Lira on July 30, 2021. “[T]hey said one of my result came out positive on HGH… I don’t understand.”

According to the federal complaint, investigators also got tipped off about PEDs in the Jacksonville, Fla., home of a person referred to as Athlete 2 in July 2021, including a box of 100 hypodermic needles and IGF (insulin-like growth factor).

Lira faces up to 10 years in prison if convicted. He was taken into custody Wednesday and was expected to be in Texas federal court later in the day.

Lira is charged with violating the Rodchenkov Anti-Doping Act, which was signed into law on Dec. 4, 2020.